Gong Xi Fa Cai, ladles and jellyspoons!! (note that it does not actually mean 'Happy New Year', it's just an associated phrase)

Jia reporting in today (With Song's input here and there)~Yes, we know, there's been some period of silence and its not exactly the first day of CNY but there are actually 15 days before the actual festivities end so we technically aren't late. This isn't quite a review regarding restaurants because it was rude to the elders at the table to take your phone out during meals but I still managed a few photos but no notes... We reviewed what we could. NB: This will be a photo heavy and seemingly long post, with some touristy photos chucked in.

Anyway the reason for our title is that we recently went to China for almost a week and when we got back it was new year and then packing to go home, etc, etc. We started off in Beijing for a day, then Harbin for a few days then the last day in Beijing, then the next day we set off home.

On the first night we arrived we went to some place apparently quite famous for specialising in duck dishes (and they really did just do duck dishes well. When asking the waiters about what to get here, all they could tell us about was their duck). Because I was rather sleepy not to mention out of my depth in this foreign country, I wasn't able to get the name for you guys. It was opposite some popular department store mall though,as I recall our guide telling us.


Steamed chicken, quite nice.
Pear juice on the side, nothing artificial about it, delicious. 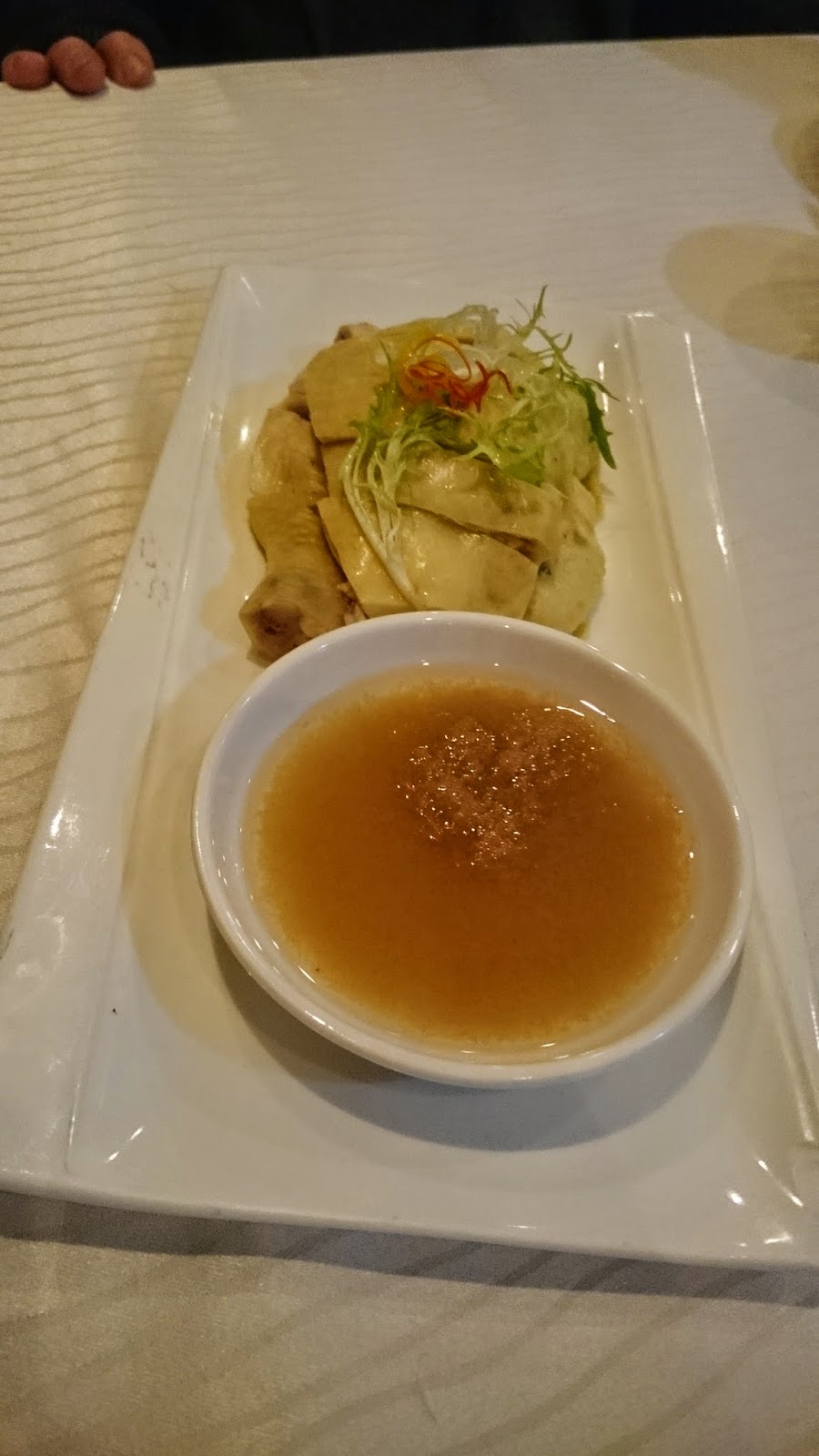 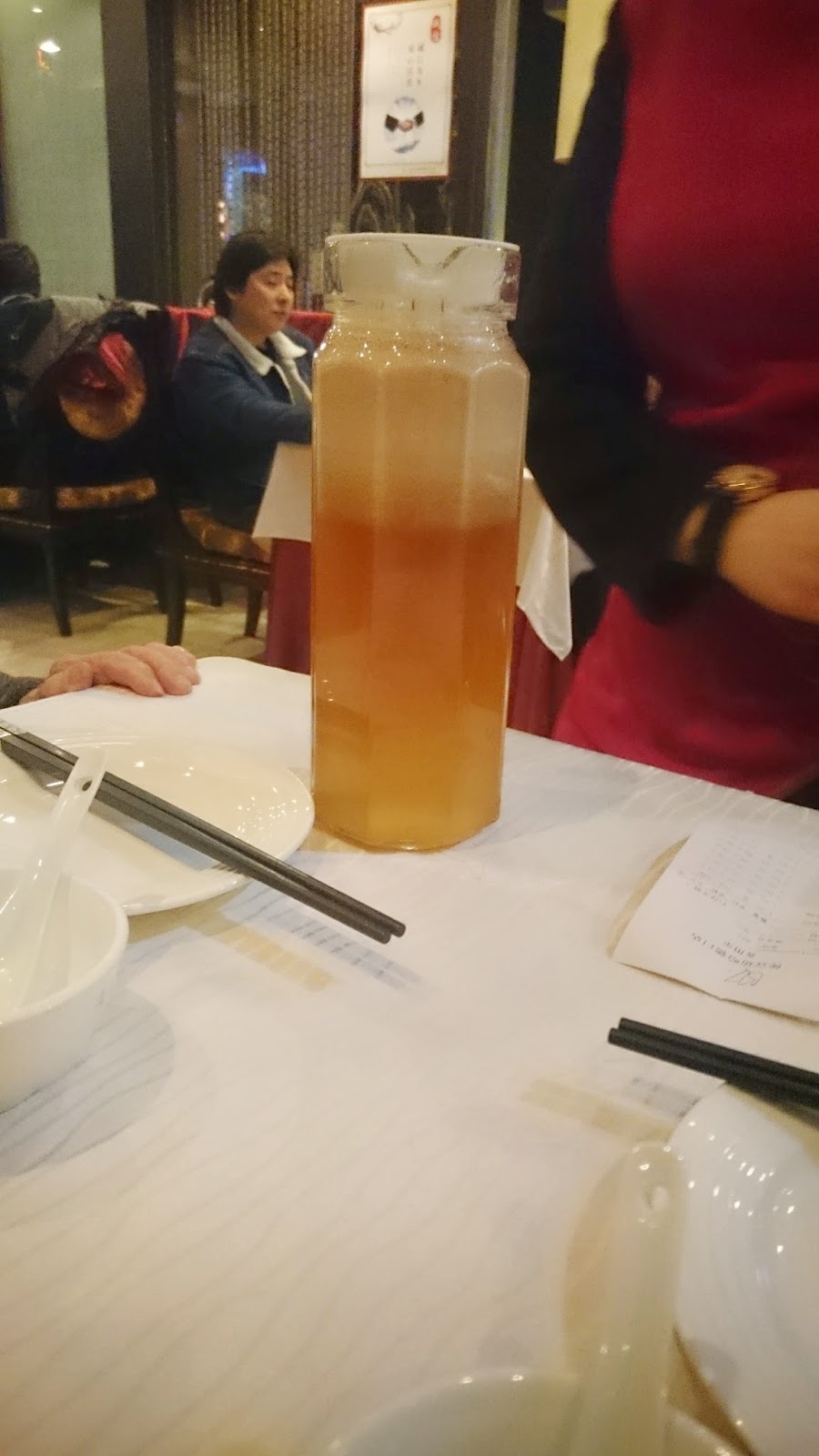 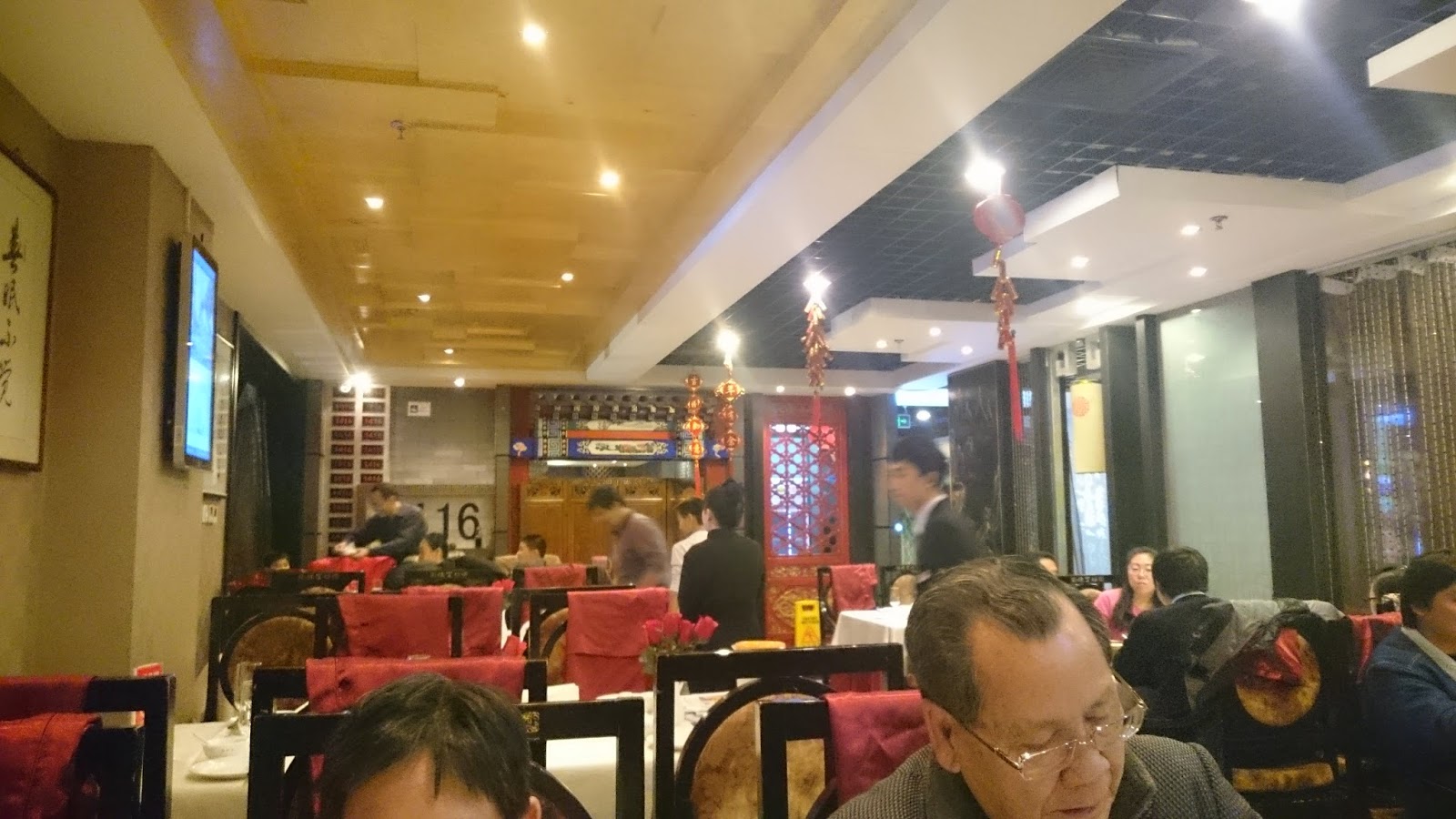 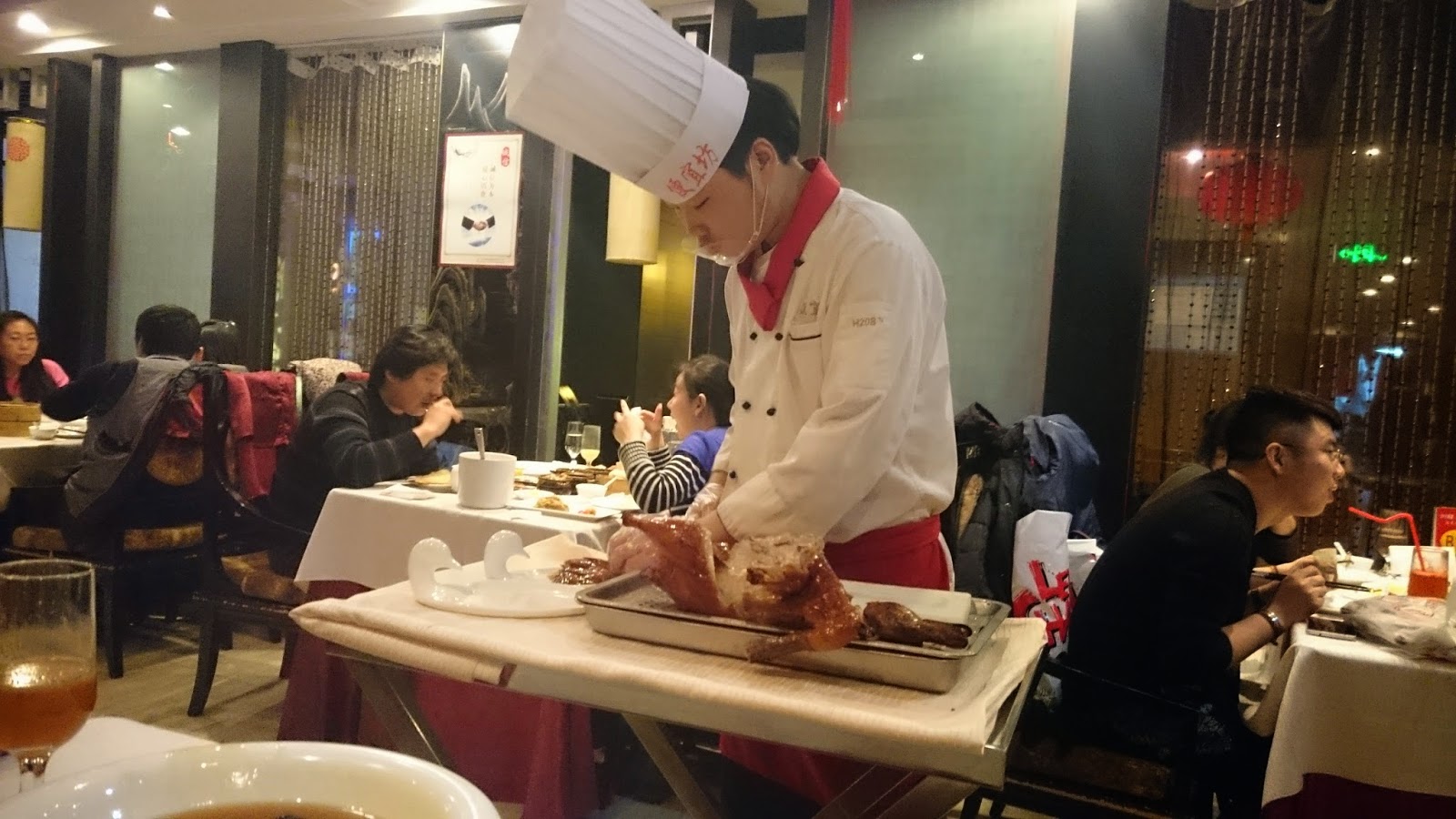 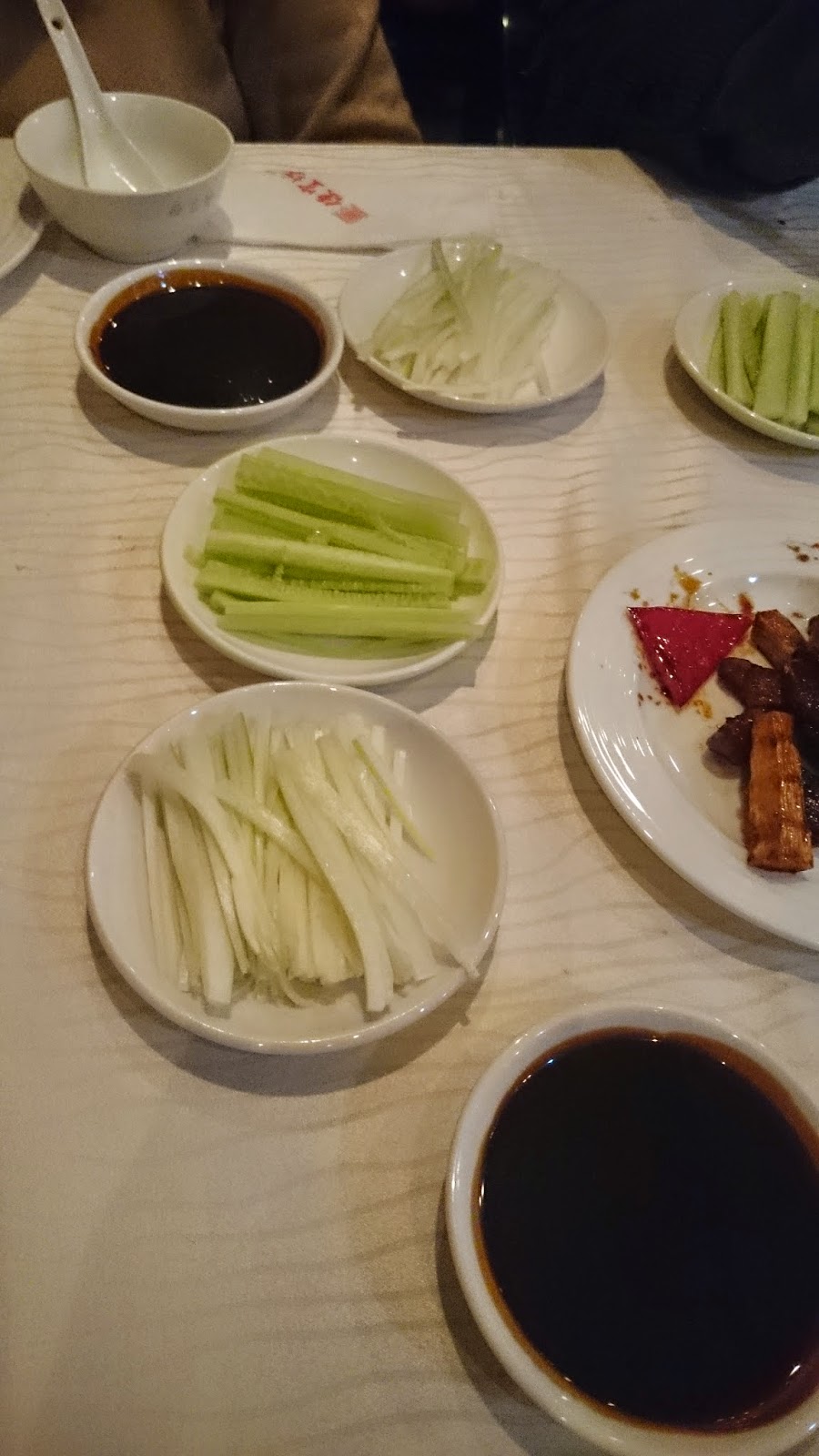 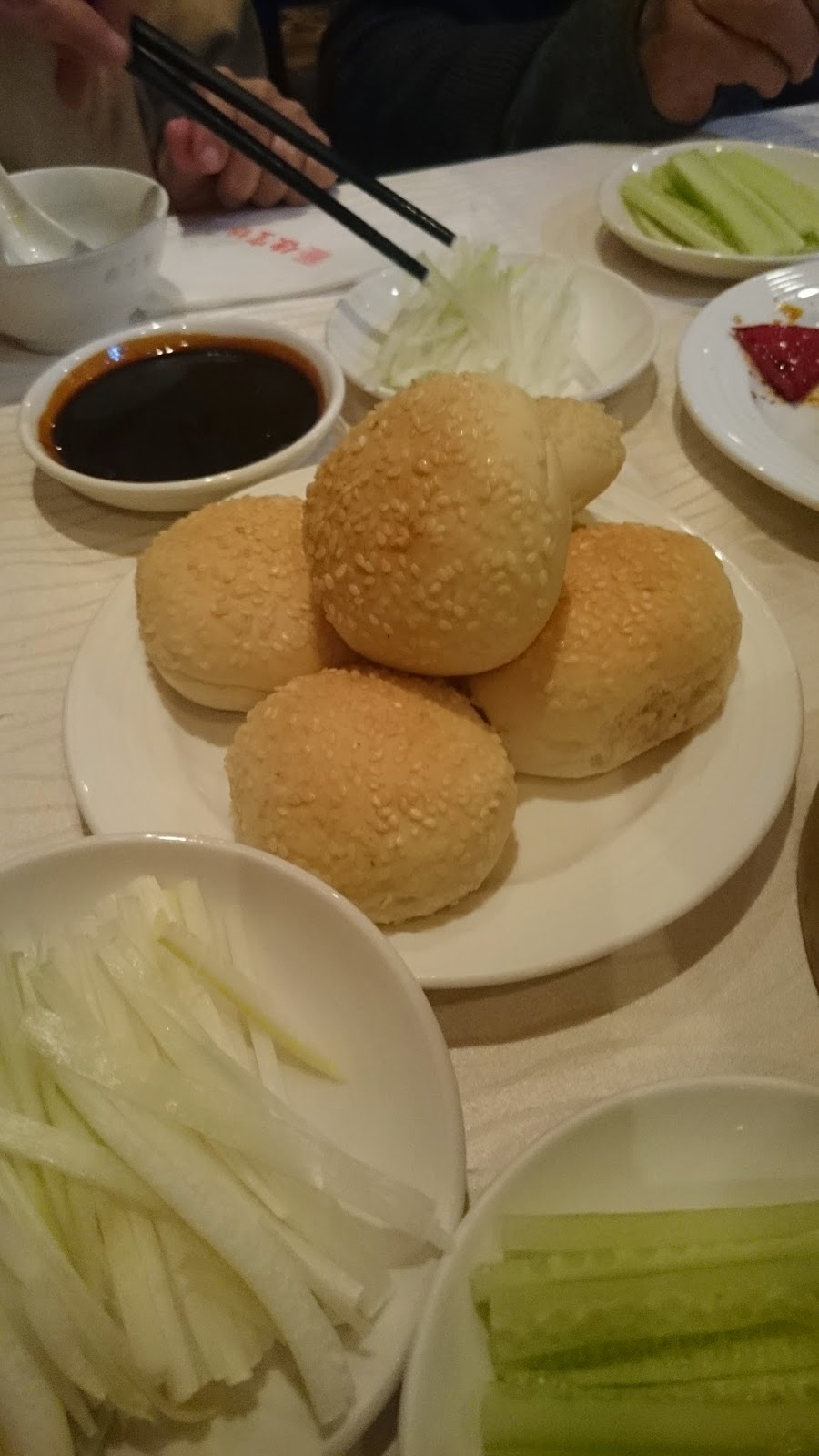 This was indeed part of the Peking Duck set, as those of you who frequent Chinese restaurants would know; after all, why not have the local specialty when in Peking/Beijing?


Since our hotels had buffet breakfasts, our breakfasts in both Beijing and Harbin were something like this most days. 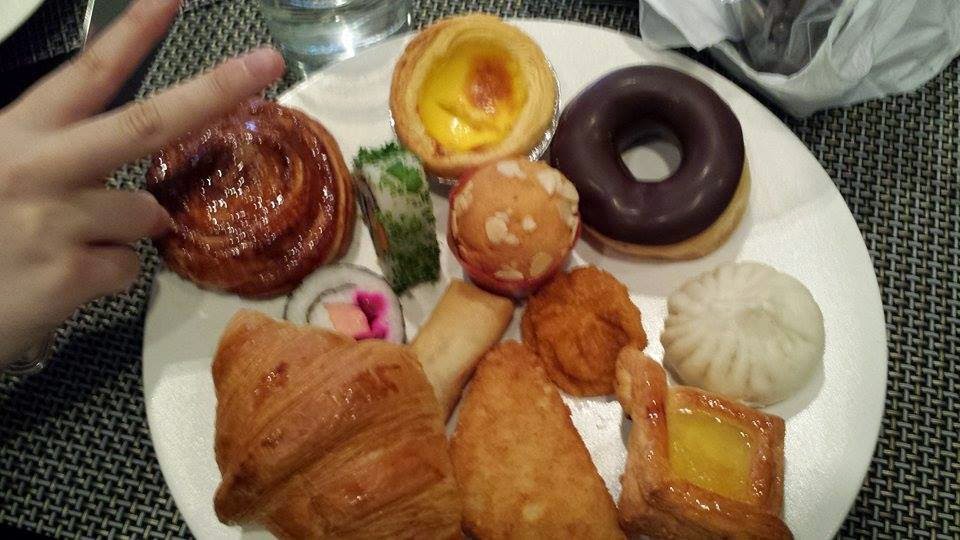 We didn't really eat much of note here. Oh in China I like how the orders are taken down via some electronic device. I don't like how even if there are no smoking signs they are basically rules made to be broken. It's thoroughly unpleasant to eat food with cigarette smoke wafting up your nose and ruining the aroma of the food. -15 degrees Celsius was bearable with many layers. There were quite a few places that opened up late, and even 24/7 restaurants with (relatively)nice food, not just maccas and the like. We went to places like The King of Dumplings(again the smoke thing, but the dumplings were nice), Tiger Topoki(not recommended, the fish flavoured things were anything but fish like. Singapore's fish balls and fish cakes beat them 100x over), and some other places we didn't get the names of(sorry!!), but we know it had some delicious ox tail dish where you could eat the tender meat off the bones with a plastic glove over your hand(so handy), and use a small straw to suck the marrow out of it. It sounds barbaric I know but it was truly delicious, if a little fatty. 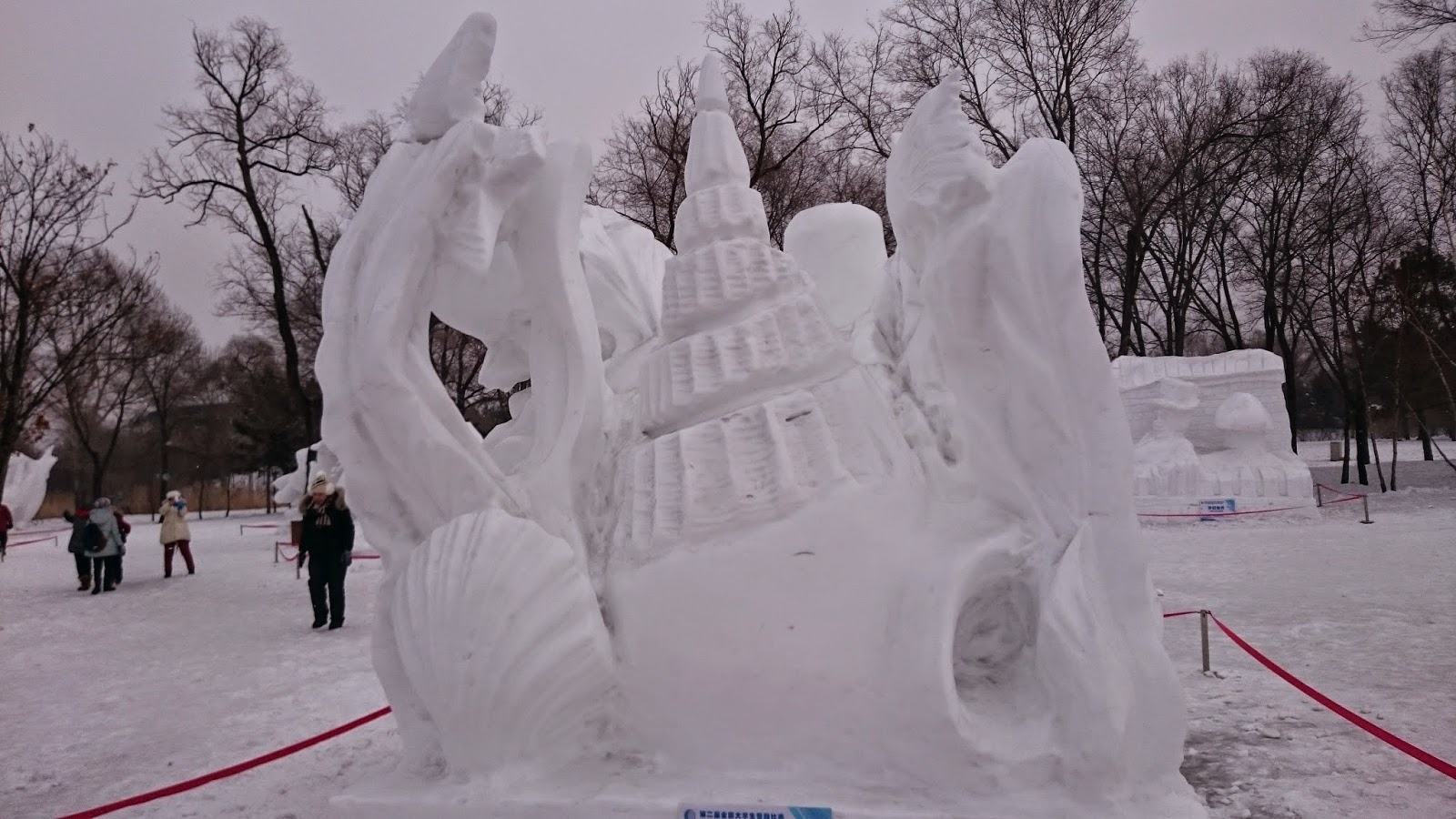 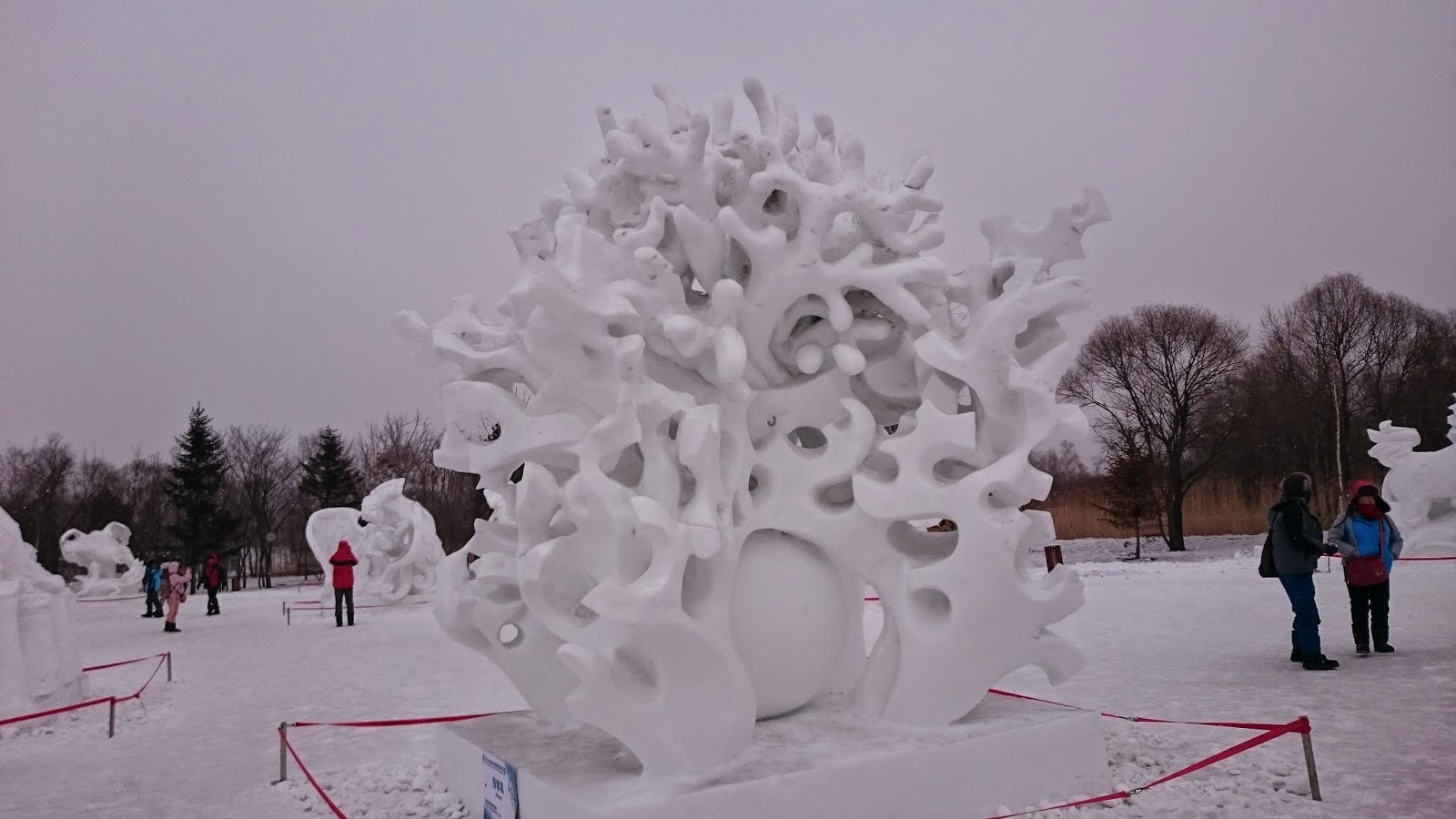 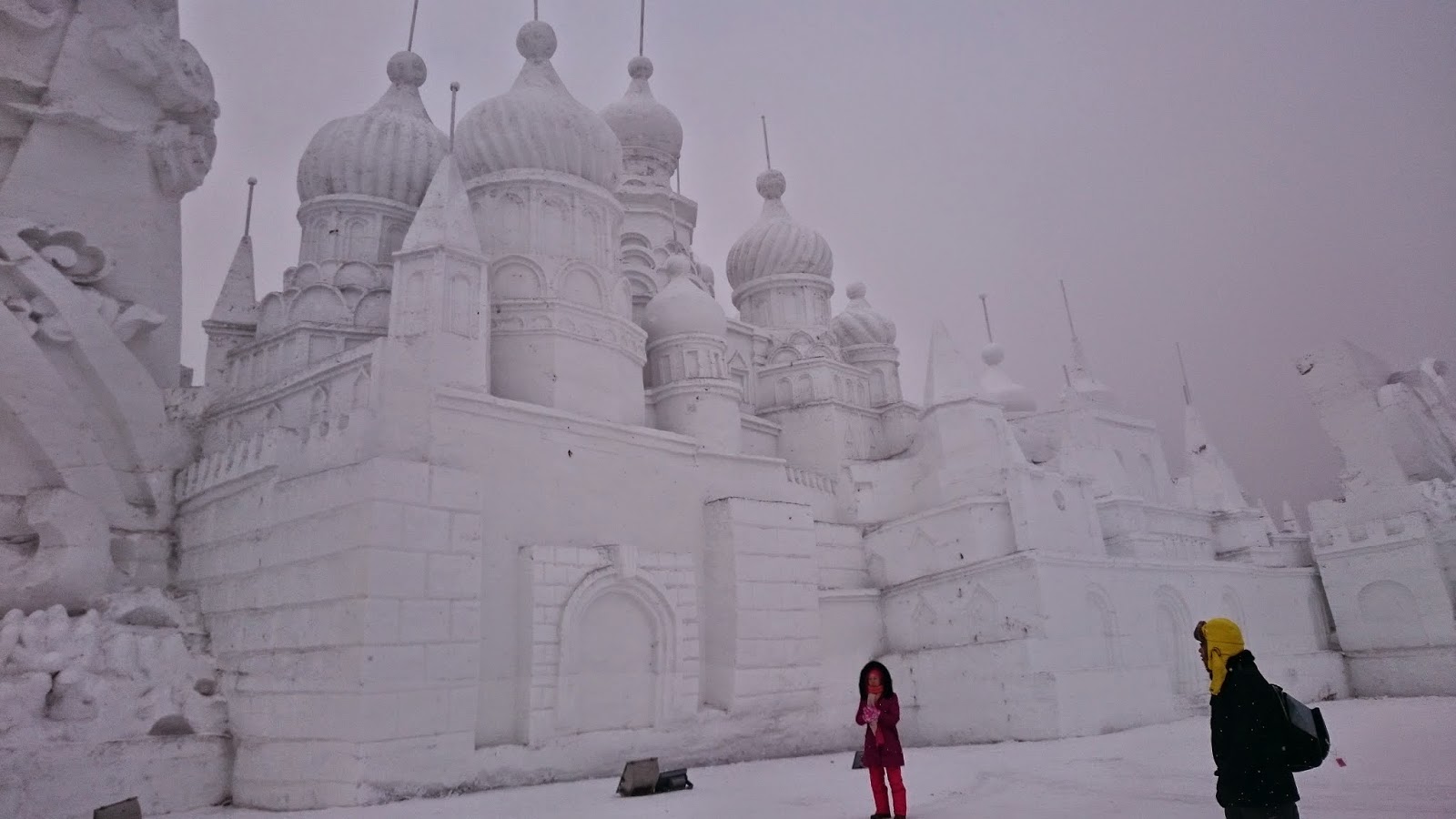 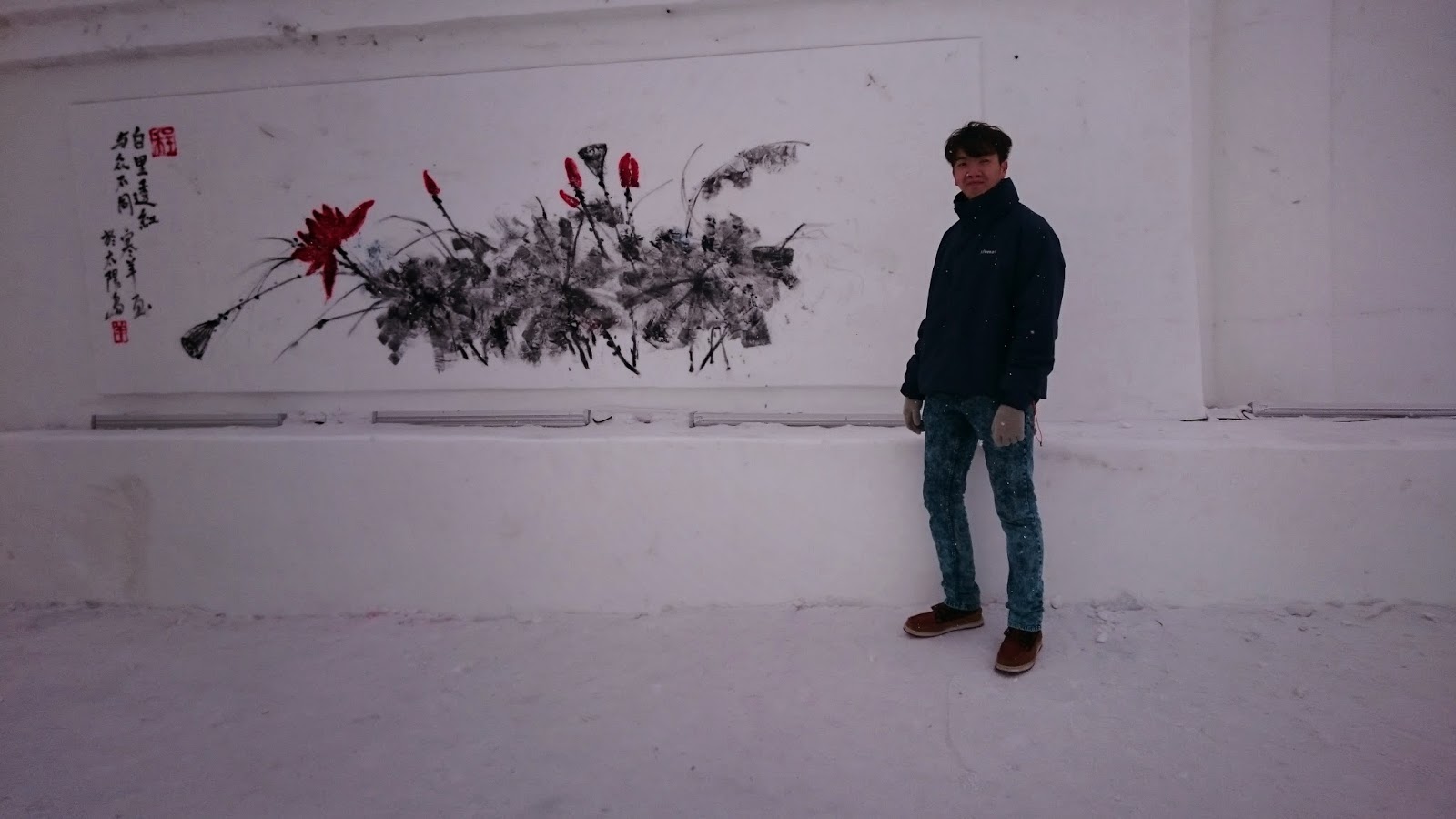 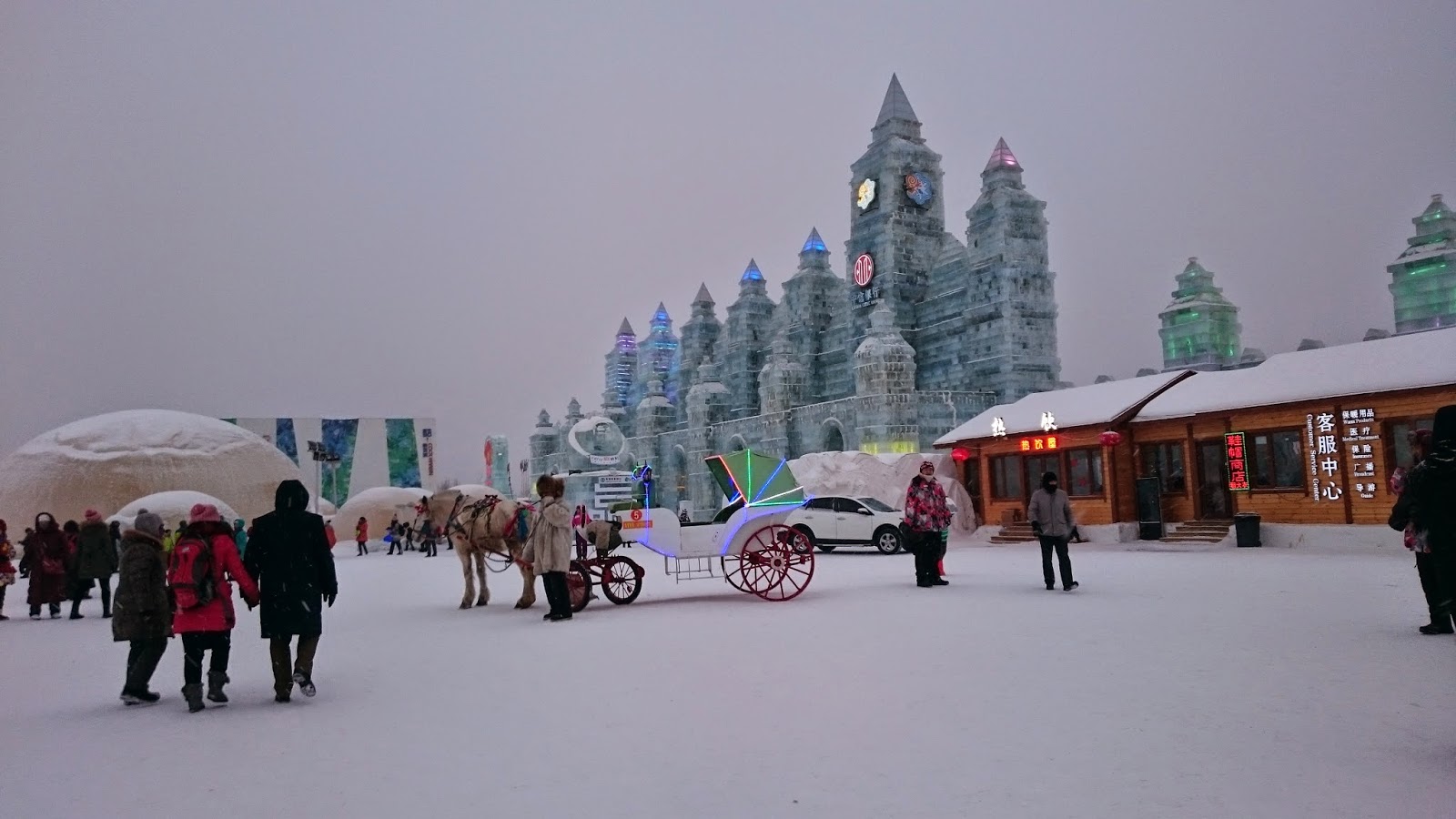 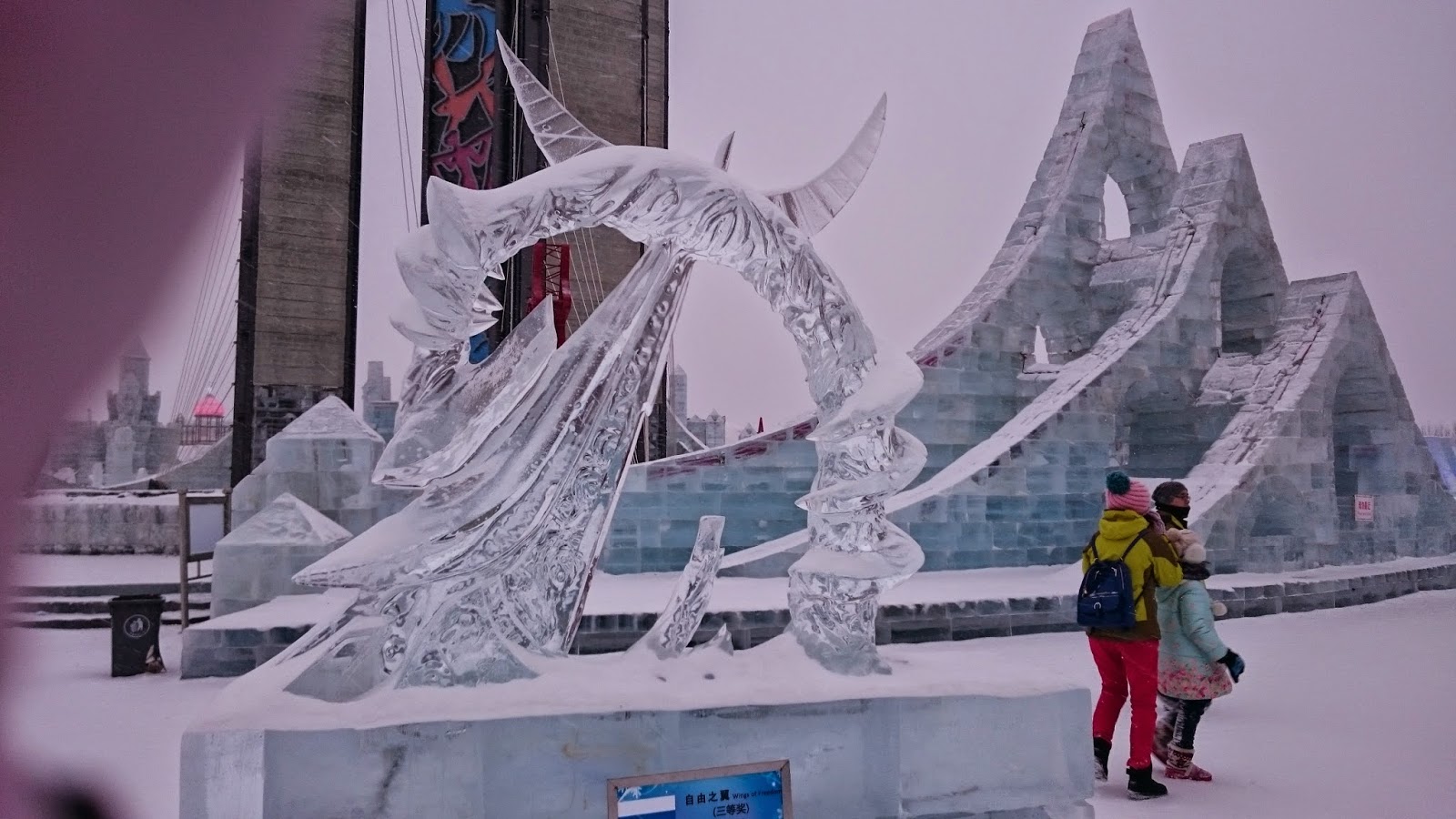 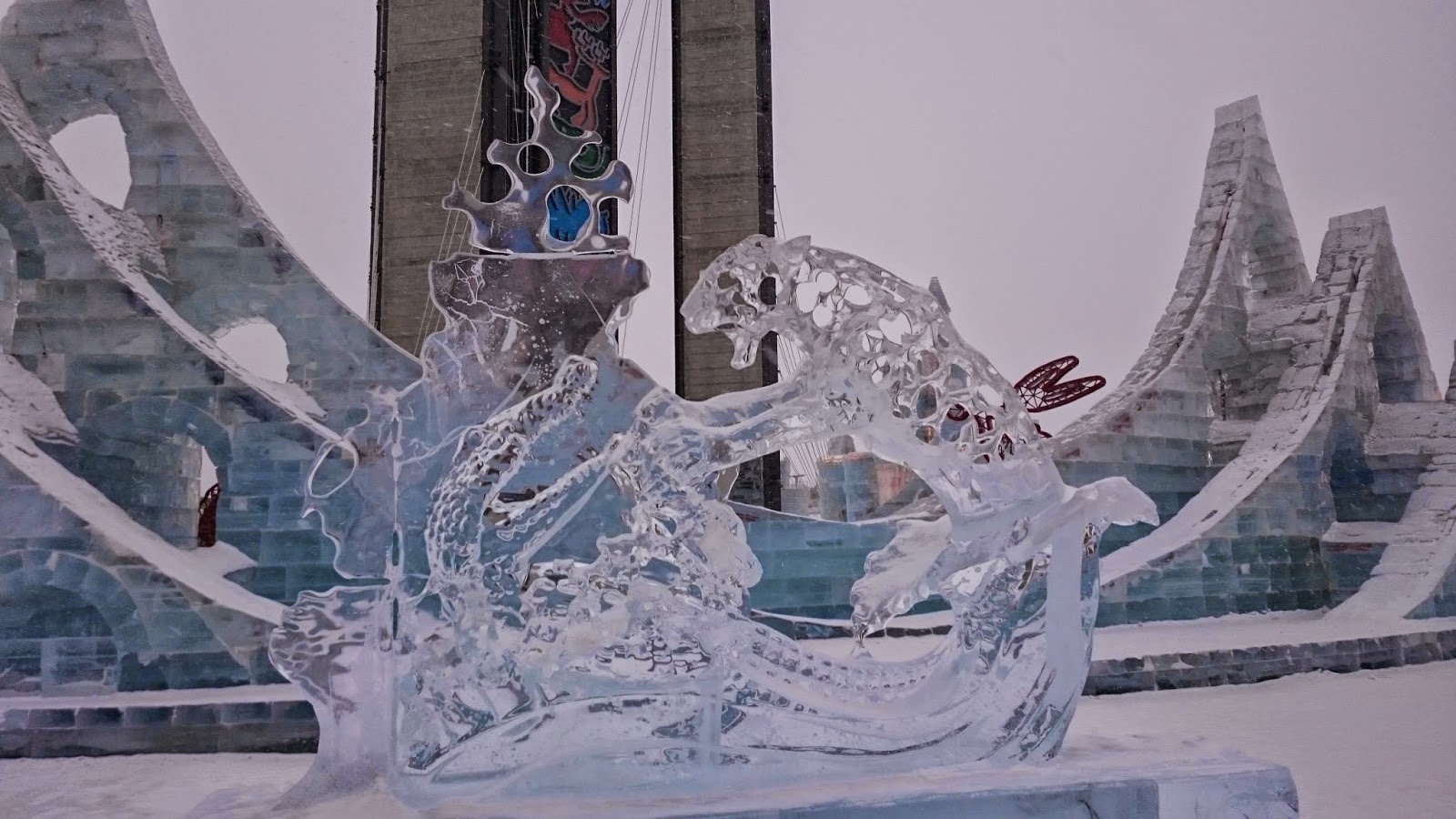 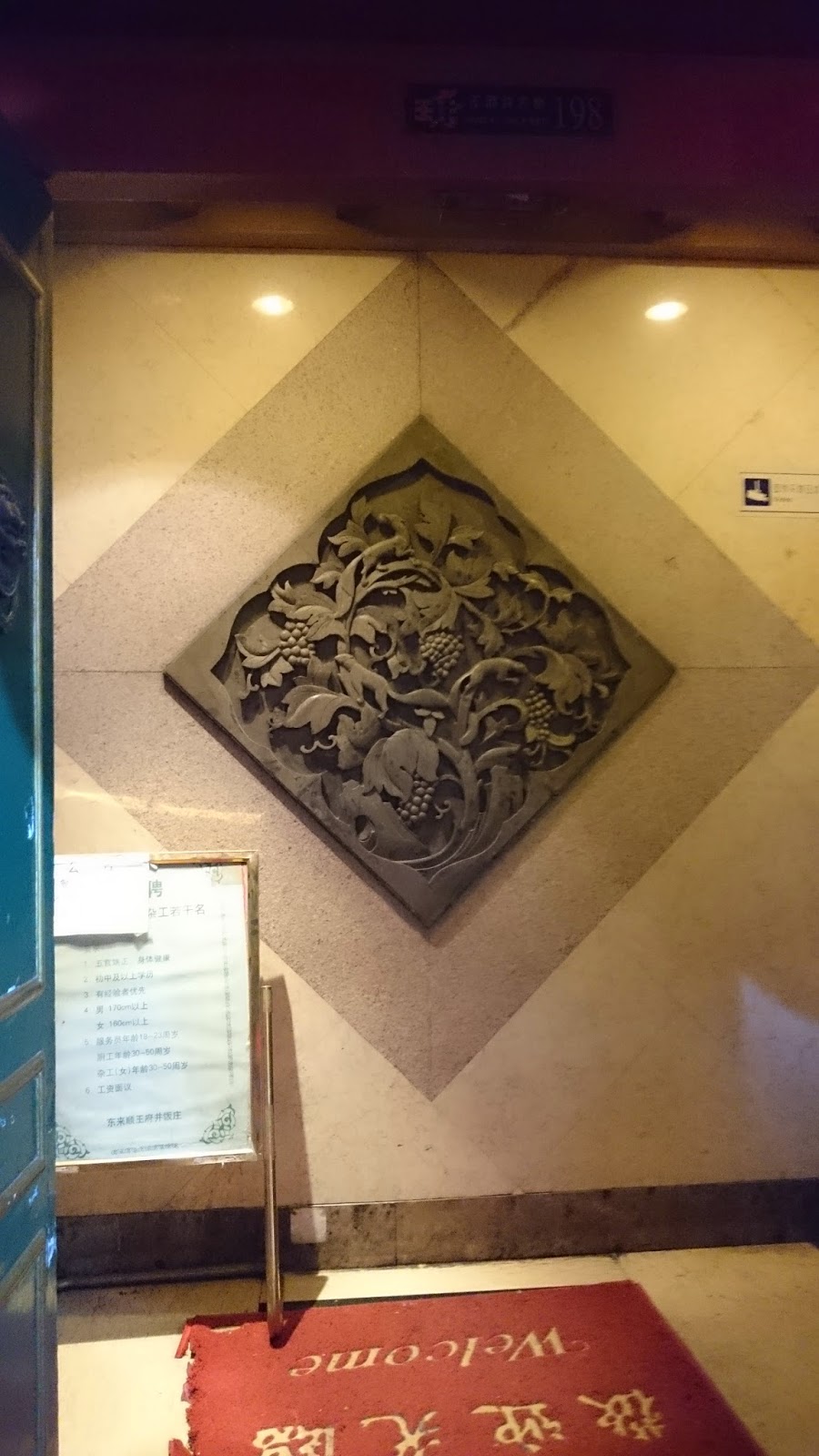 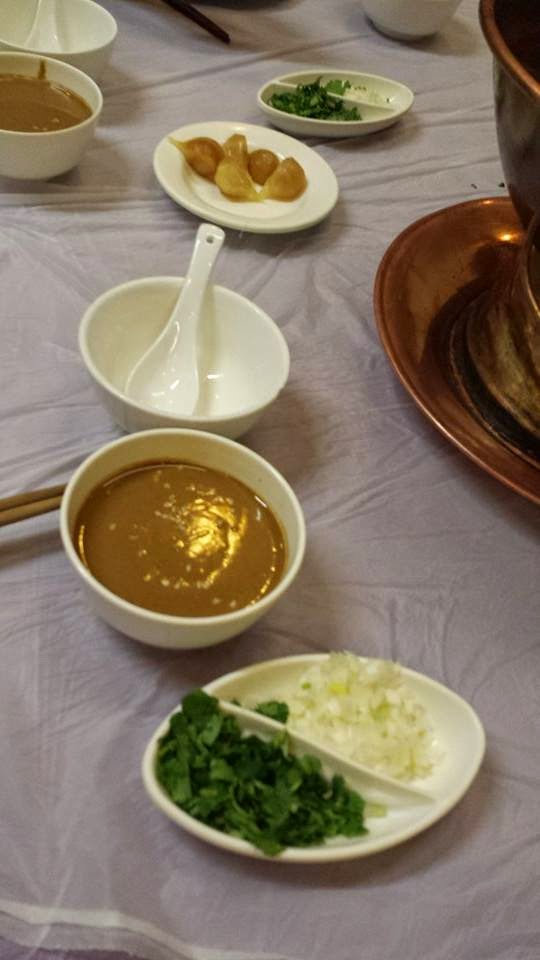 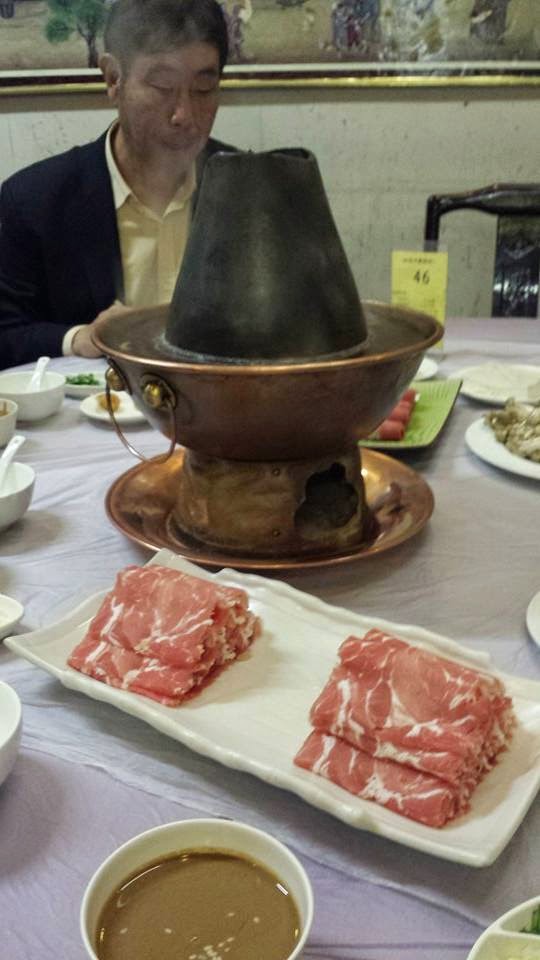 We ordered lots of mutton, mushrooms and vegetables. The bowl with the brown stuff in it has sauce, and it was really, really strong and not in a nice way. I suppose I could only compare it to oyster sauce straight from a bottle and not diluted, but maybe with mayonnaise thrown in too. They also gave us a drink with a name that Songie and I translated into "Sour Lady"(that's most likely not the actual translation since we didn't hear properly but it really fit), and Songie made up a story of why she was so sour every time he took a sip. It was truly sour. Like your face would just look like you sucked a lemon if you drank it. I think it was some sour plum drink. I was wishing so badly for tea to be honest.

Basically they display the things, and the prices are generally shown attached to the top of the stall, but the names are in Chinese. Once you pick what you want they'll deep-fry it for you in front of you, and maybe garnish with things if necessary. 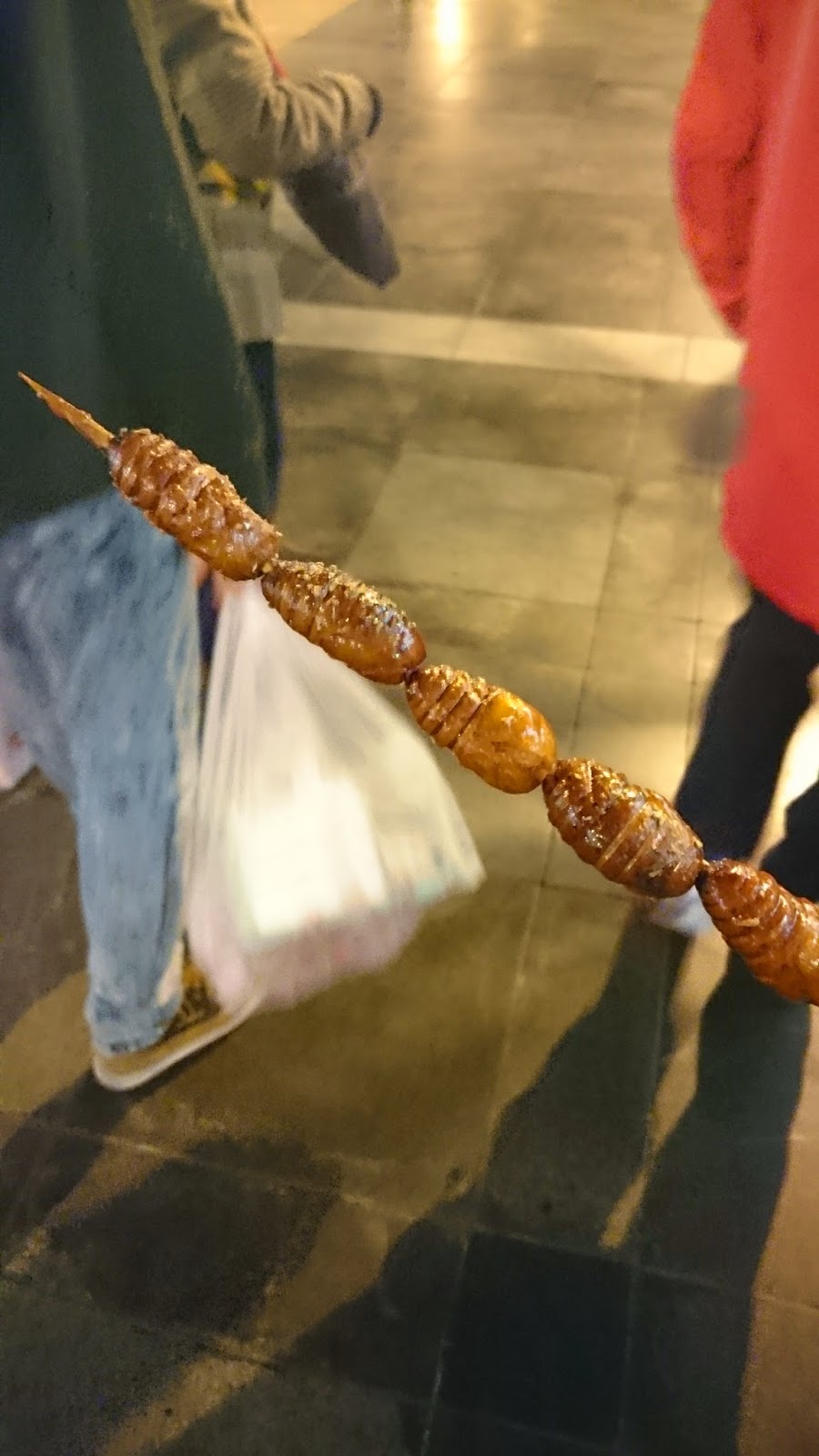 The silk worms took a while for me to bring myself to eat, telling myself it was for you guys; our readers. I figured since I was here I'd try these somewhat exotic foods. Once I got past the initial "It's a freaking silk worm" I took a bite. The skin was a bit hard but it was thin and a bit crunchy, and the added flavouring on top was pretty good, just a bit of spices. The inside was a bit crumbly and soft like liver, and had a similar flavour too. While probably not something I would try again, it was definitely edible.

We passed some other stalls with even more exotic skewers... Surprisingly this time it was Songie who decided he wanted to try something foreign; the scorpion. 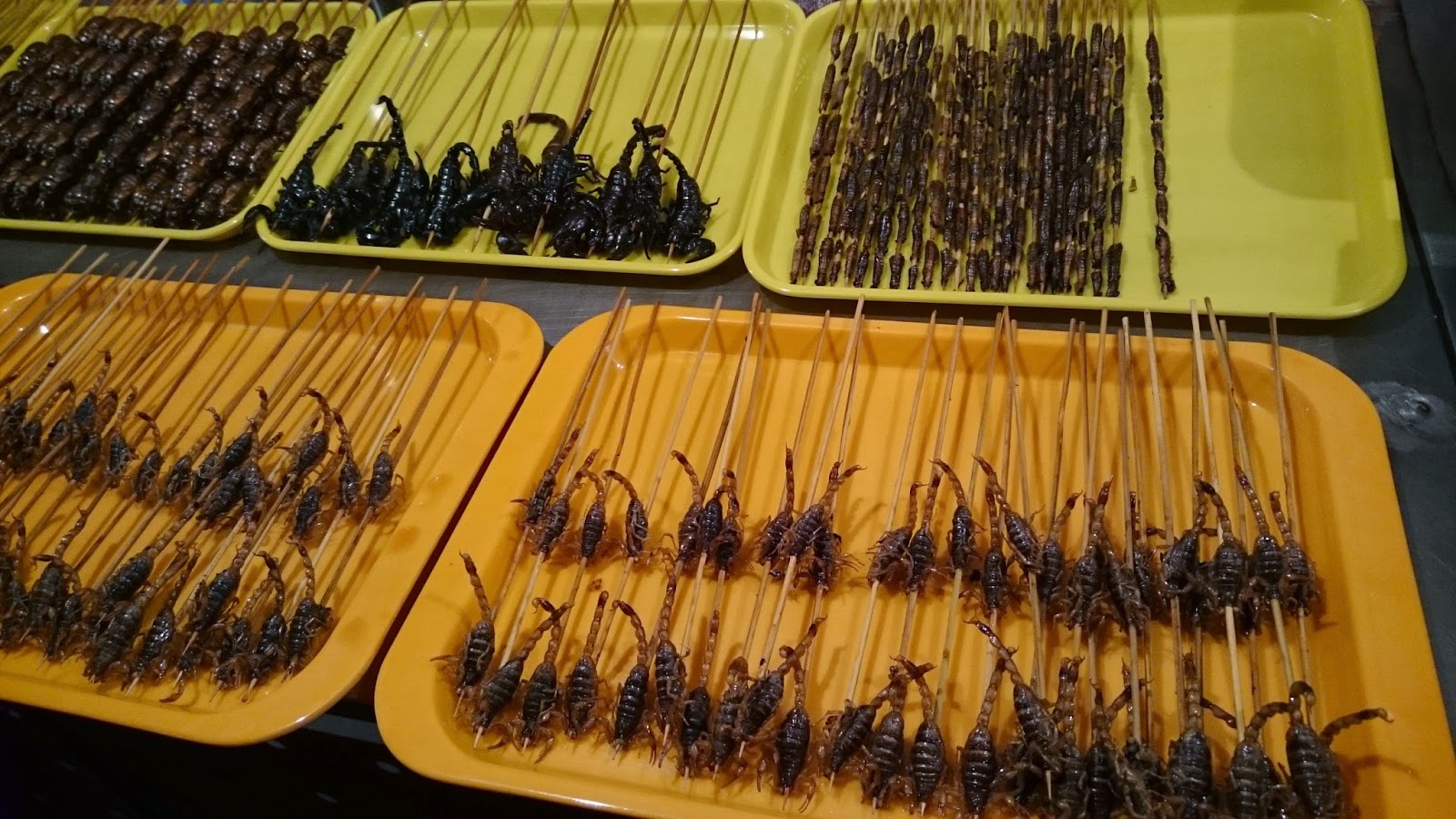 The scorpions had a much more pleasant taste, though I think it had less to do with the scorpion and more to do with the size and the deep fryer oil. It was really crunchy and it tasted like some salty, garlic-y chip. Albeit with a lot of sharp edges. 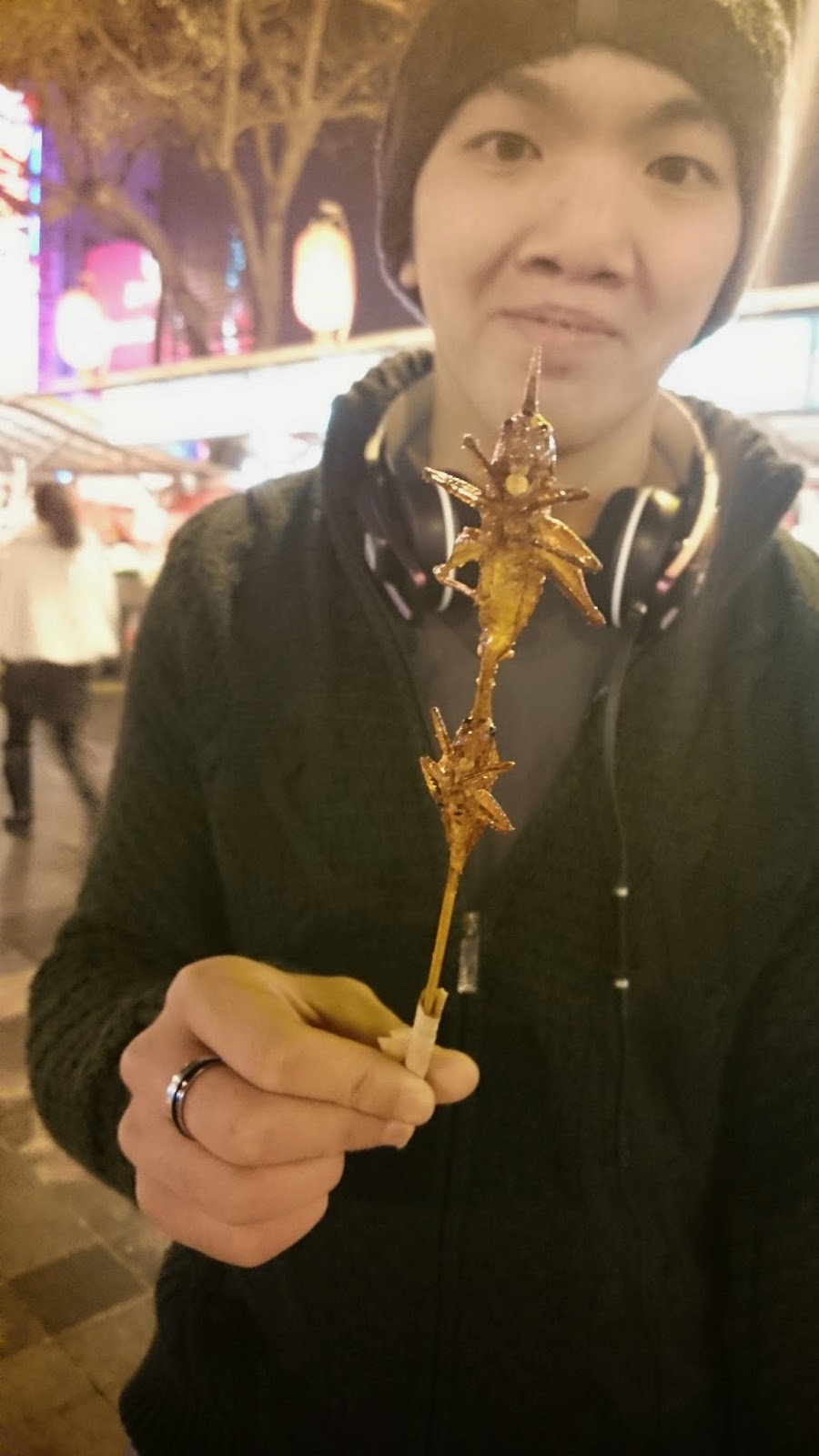 Crickets, they tasted about the same as the scorpion with a slight and subtle variation in taste but essentially the crunchy texture and salty flavour remained the same.
There were actually quite a lot of foreigners around and they seemed horrified when we were eating the crickets and such. It was pretty funny. 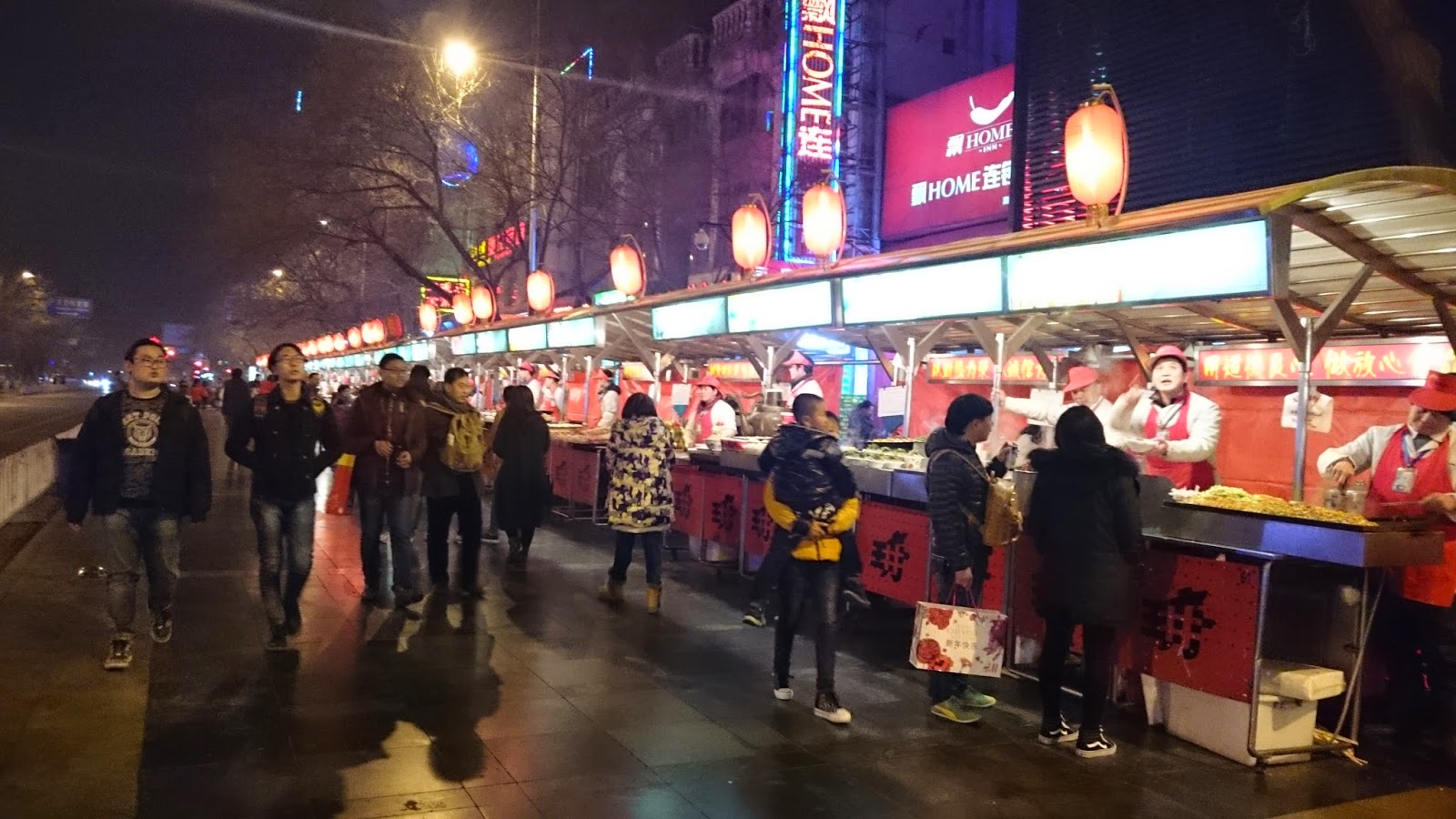 Regarding the starfish they were bigger than my hand so you can understand why we were reluctant to try it. However my father told us later that you dont actually eat the starfish, you break it open at the centre and eat the inside. Makes more sense I suppose.


Okay the spider. The big. Fat. Spider. This too was deep fried and we stared at it in horror. (At this point I actually started shuddering at what I had just signed myself up to do. Note: when you buy beware of the scams they pull. I asked the stall owner how much teh spider was, CLEARLY pointing to the goddamn spider. He replied 15 yuan 15 yuan. I proceeded to ask about 3-4 more times to make sure and only BECAUSE it was so cheap I decided to go with it. I was horrified to find out that he had pulled a real fast one and charged me 80 for it instead. He then said it was all on the sign which, to be fair, it was. But I cant read chinese, I don't even know the word for spider. You can tell I'm still pretty miffed about that. Moving on..) Now, unlike the others, this one had a taste. It was terrible. The initial taste was okay, but the texture was slightly furry and a bit tough, it wasn't crunchy like the others at all. It was a little bit soft, like toast that you toasted but sorta just left out and forgot to eat and when you came back it was still sort of toasted but not as perfect. And the taste. It began as the others did; some salt and some garlic taste, but it was followed by this strange aftertaste that was almost numbing, and personally gave me the idea of something rotting. It was only very faint though, but still enough to be there. Songie didn't enjoy that one at all, and it was probably worse since i let him have the majority seeing as he bought it. Yea, there is no way we're exaggerating this one here. Like honestly, only try this if you're REALLY feeling adventurous and even then, approach with caution. Your only excuse to complain about having this even though we've warned you how bad this is, is that if you're absolutely off your face and have no idea what you're doing. I almost puked and I haven't done that since I was.. 12?

I also tried some beetle after I ate the spider but i think the spider taste just overpowered the beetle so I couldn't enjoy it. Not that beetles were that enjoyable to start with anyways.

We cleansed our palates with some toffee strawberries on a skewer. Previously this was 5 yuan but somehow it became 15 yuan that night. Or perhaps I heard wrong the first time. In any case, it was delicious. the thin(but thicker in some parts) layer of caramelised sugar coating the strawberrry was kept crisp by the cool air, but it broke easily and the strawberry itself was red, juicy and delicious; making it a perfect combination. Between the toffee grapes we had in Germany and these, I would have trouble deciding which was better. The only thing with these strawberry skewers is that they have some small, sour apple type thing at the bottom posing as a strawberry; also glazed, but I cannot fathom why they thought such a comparitively sour thing would be the taste they thought you wanted to finish on. I say apple type thing but it only looks like an apple; the inside is some sort of medium sized pip, and size wise it would be about the size of a table tennis ball.

In any case that wraps up our trip to China, we will leave you with some obligatory tourist shots and more of the first picture. 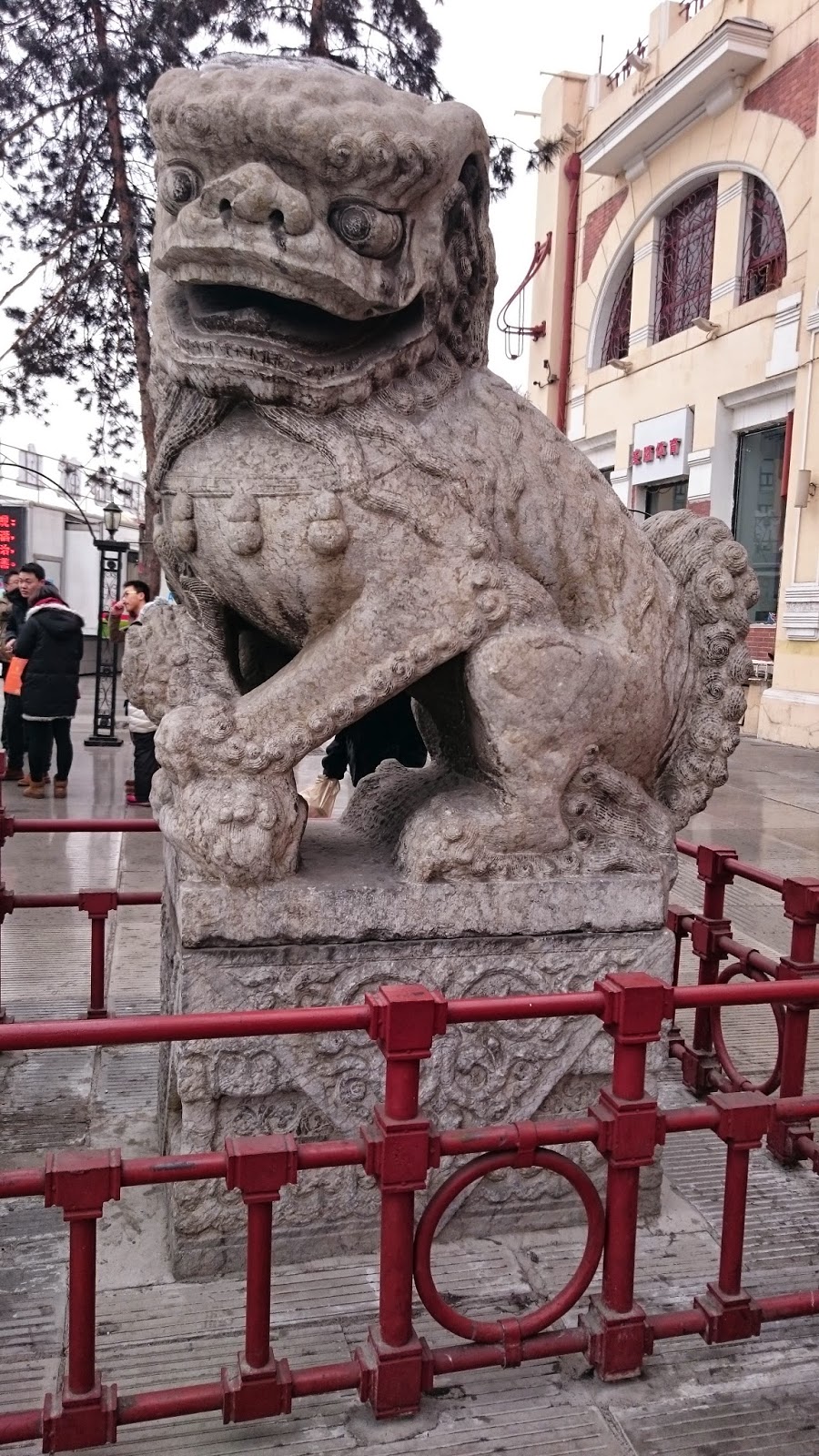 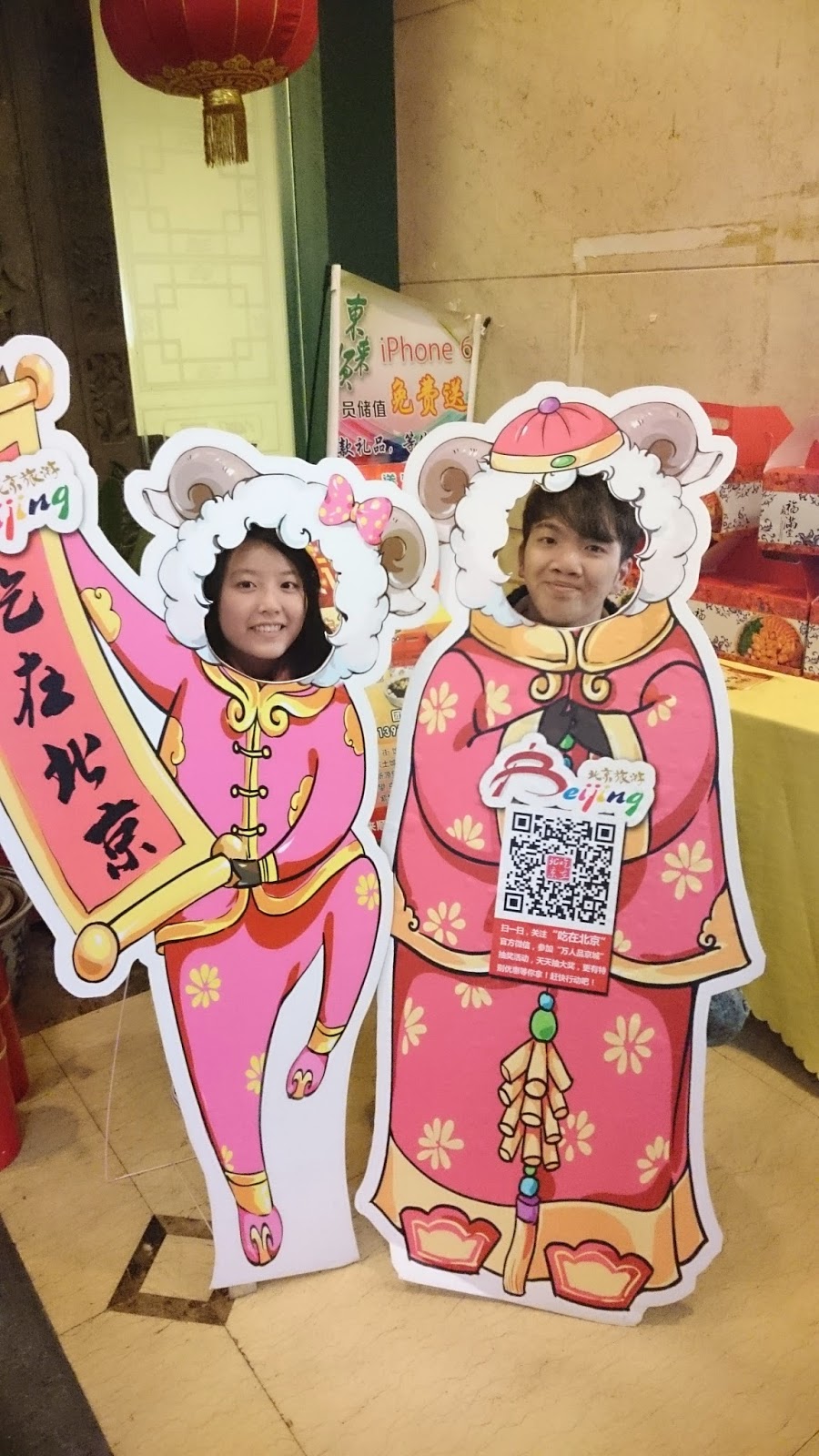