Laaadles and jellyspoons~ it's been a while. My computer broke down completely and so I'm posting from Songie's computer while taking a break from studying. It's currently exam time for us uni students(except Songie, he's already in the workforce oooooh~); but I suspect you know that already since most of our readers are uni students too, hm? In any case good luck!! 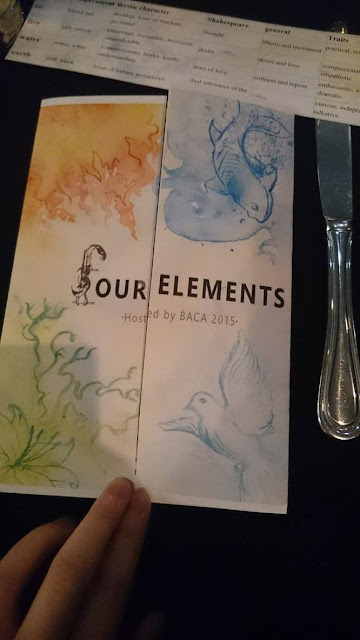 I was introduced to this event by AUT because my amaaaazing super duper close(are we besties level? Hard to tell. Probably not if I cant tell. Yeah) friend Tara was in charge of the desserts section; the air element. Well and her team of course :3 it sounded like fun and I'm always keen to eat her food so it was a no brainer. It was on the last day of uni too, so a little celebratory dinner was a nice treat. On a side note I've been dreadfully sick these few weeks so it wasn't great timing but I still went. You had to book and it was a pretty popular event so no way was I missing out, y'know?

Atmosphere
As soon as you entered you were offered a complimentary sangria(or non-alcoholic beverage as in my case) and some chips and dip, and you get seated for a while before your table is ready. In our case, Songie and I sat for ages because our adult company was still looking for parking(an understandable problem on a Friday night). 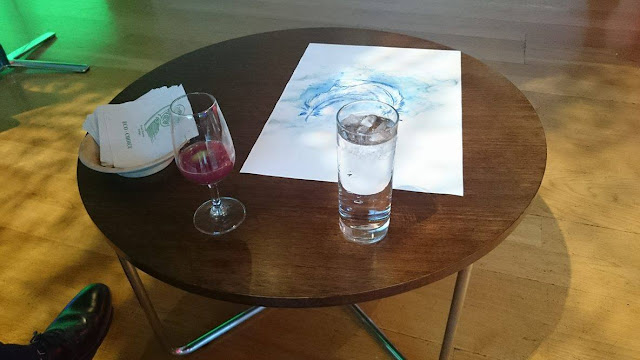 The atmosphere was great; the different themes were really played into with the lighting, the table displays(especially in the waiting lobby where piko cafe usually is), the couches lumped together in a classy manner, the relaxing music. 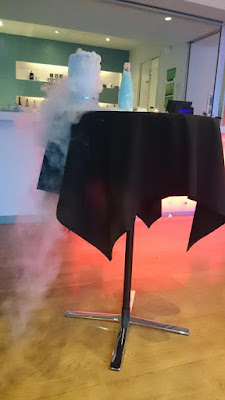 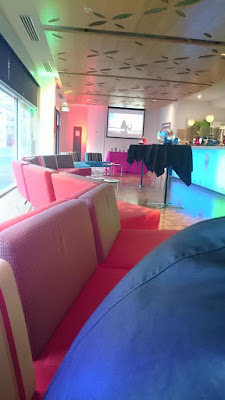 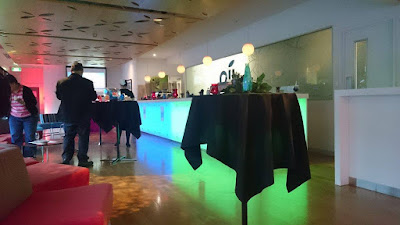 The air display seemed kind of messy though in comparison to the other displays in the lobby, so that was kind of disappointing. On the other hand bonus points for the use of the dried ice!! It was really enjoyable to watch and play with the 'smoke' as it poured out. Its not that the air display wasn't nice but it just wasn't as tidy, I suppose? But its a pretty hard element to 'display', it's more of one that you feel. The little pot-plants for the earth display, the fish brought in specially for the water display, the little touches were cute. 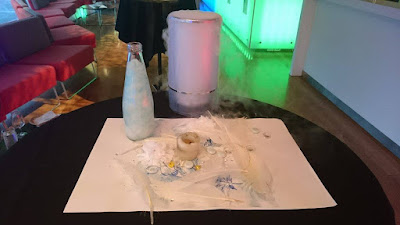 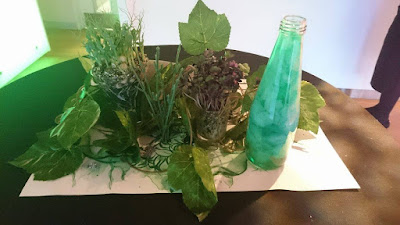 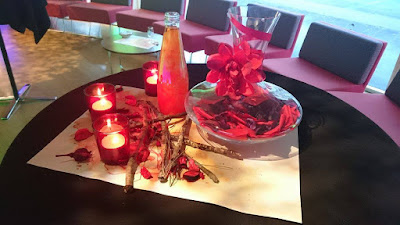 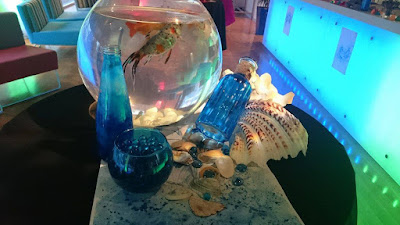 Once the table is ready and your party is assembled, you are led through the kitchen to get a glimpse of the food preparation and then you enter the restaurant. There is another door available but there's something a little more fun about being able to see the world that is usually behind closed doors. There is constant rushing about as the students cant even spare you a glance, and there are calls of "Yes chef"(which made me think of Gordon Ramsey's show) and sounds of food preparation happening. Maybe it's also to remind you that it's not hardened professionals cooking for you, that there are hardworking students trying their best in the kitchen and a slight hint not to be harsh in your critique if you have any. 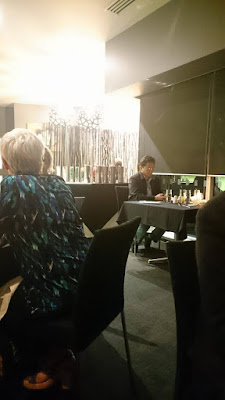 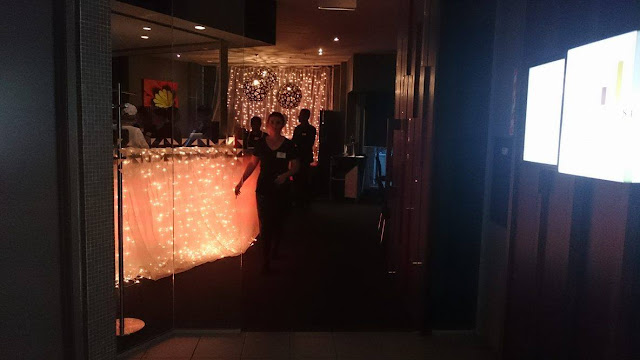 The restaurant itself, the lighting was a bit dim - perhaps for a romantic setting-, the tables weren't too close together either so it was rather cozy and easy for our own table to converse. The display was more muted in the restaurant though the lighting and obvious colour coding of elements was still present in the serviette colours. Pretty sure we got air since we had white. The way the serviettes were stuffed into the cloth napkins were a little on the rough side though. They also provided some entertainment in the form of monthly zodiac element classifications and characteristics (apparently I'm Earth element because I'm a Taurus) and a mini quiz. 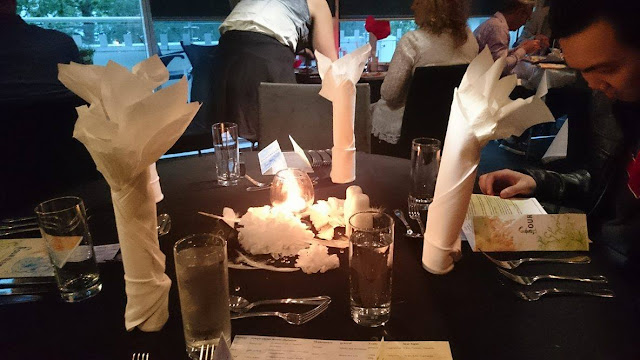 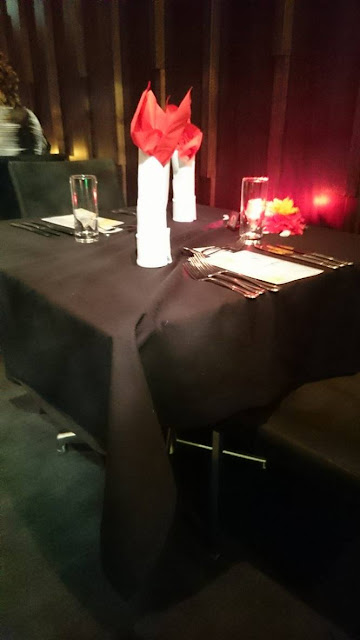 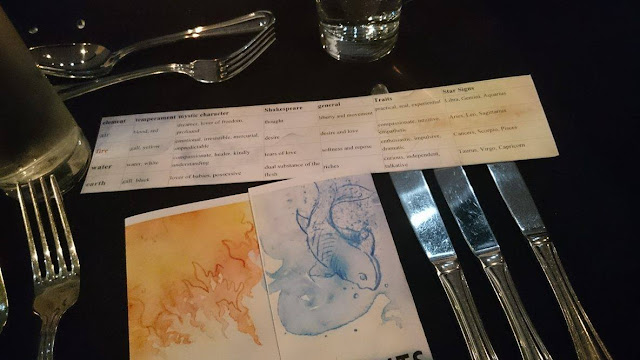 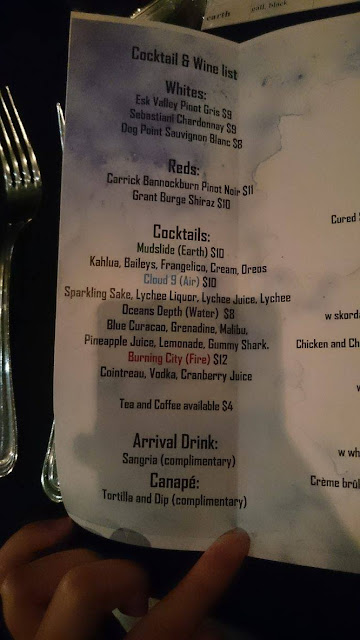 The cocktail menu sounded superb. I so wanted to try the Mudslide. Songie ordered the Cloud9 cocktail, which was pink and had dried ice and lychee jelly and was accompanied by a few spritz of a perfume of some sort that smelled like jelly(and the waitress insisted it was edible); my friend Stephanie has enlightened me on the existence of "candy sprays", which sounds pretty good as my future perfume of choice hahaha. 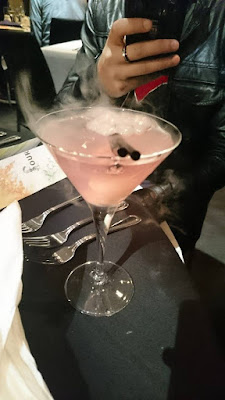 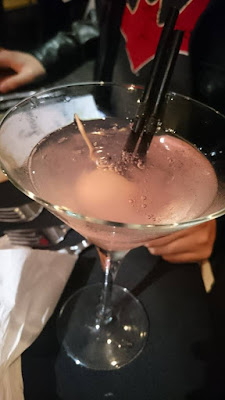 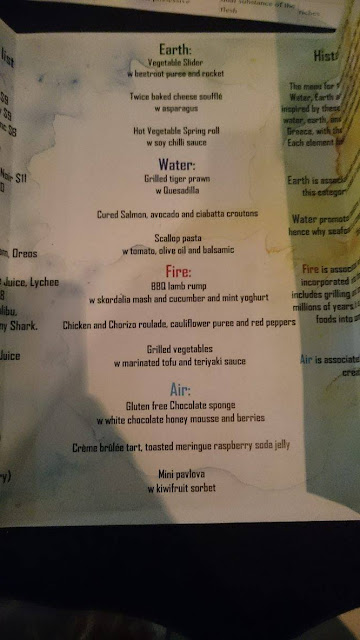 Earth
The cheese souffle!! I cannot believe they ran out. It was only 8 o' clock, though granted the event started at 6. We were so keen for it though :( I did get the hot vegetable spring roll I ordered though so thats nice. It was really crunchy and pretty oily, and it seemed like one of my springrolls barely made it out of the deepfryer before it became burnt, but other than that it was really nice. It was also presented beautifully in a very simple but refreshing colour palette. Songie had a vegetable slider, this adorable little burger thing, it was also quite tasty and well put together. 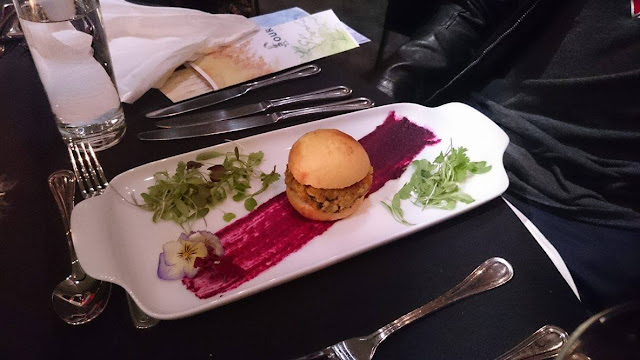 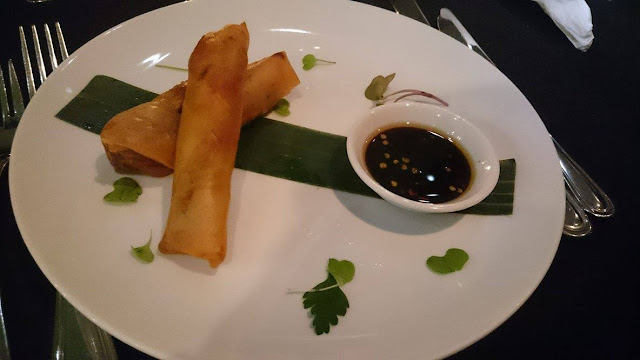 Water
It was aaaaaaall seafood. The doctor told me to avoid seafood and fried/grilled things but I guess today was a day for breaking rules. I ordered the salmon dish which featured reeally long slices of cured salmon, with 2 slices of toasted crispy bread with what appeared to be olive oil(why did they think cured salmon needed any more oil??) and some blobs of sauce on the side. 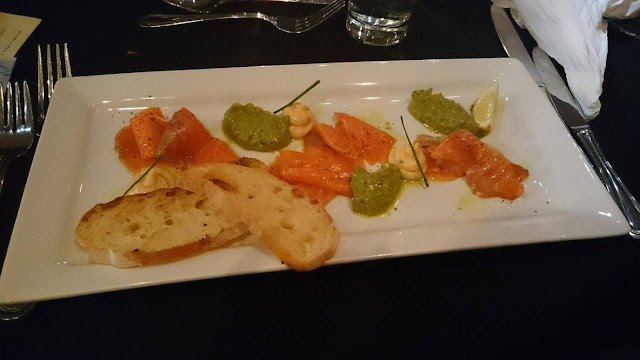 It might have had wasabi in it, since it was on the spicy side too. Stupidly, I did not use the provided knife and just thought I could bite through the salmon, and piled it onto the slice with generous helpings of the accompanying dressing(huge regrets later due to the spiciness), and I found out the hard way on my second bite that no, you could not tear through the salmon without a knife. At this point it was either choke, spit it out or have the whole piece of salmon in my mouth. I went with the third option because it seemed tidier. This of course, meant I had a huge mouthful of very oily cured salmon in my mouth with no space for other foods like the bread and spread, leading to a rather unpleasant tasting start to the meal. Along with my existing illness, I felt pretty queasy after that. I couldn't down any more seafood after that; even Songie's scallop dumpling I was sampling couldn't be finished and I shamefully hid it under my fork in a desperate attempt not to make the chef feel bad.

Fire
One HUGE complaint I have with the menu is that everything on the fire menu was spicy. I mean I understand that its part of your 'fire' idea but you should understand that not everyone can eat spicy. Cant they take a cue from Thai restaurants and have a flaming grill dish or something that is on fire for a few seconds while being dished, or just go with the idea of 'grill'='fire'? Or maybe a cheese fondue with a little candle to keep the cheese heated for the 'fire'? Also its not like we can skip the fire portion because we pay for the whole meal and its unavoidable, also you didnt even make it so the spice could be separable from the food itself. That aside, the food was pretty good(once I could get past my numbed taste-buds).
I sampled Songie's Chicken and Chorizo dish and I think it was hands down the best item on the menu(presumably because it wasn't drenched in spicy sauce), though the lamb was good too.

I myself ordered the grilled vegetables dish and between the spice and eggplant which I generally abhor, I can't say I really enjoyed my dish, plus my unsettled stomach due to the salmon. It might have been better if I wasn't sick though, who knows. The tofu was grilled as well but since it wasn't extremely marinated all I could taste was the grill taste?

Air
For the dessert, I probably could have enjoyed it more if I wasn't sick and if I got that creme brulee tart I was aiming for buuut, the pavlova I had was beautiful and delicious as well. 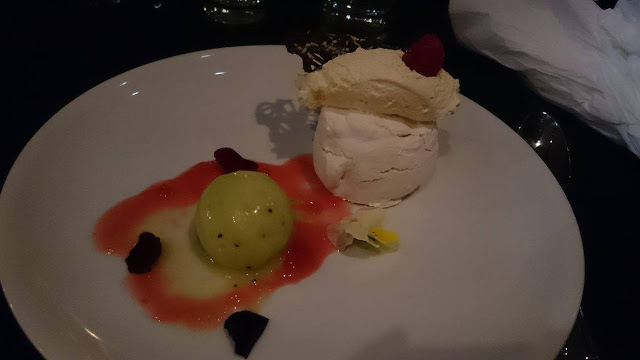 The kiwifruit sorbet was kind of like foam so it was fitting of the theme but since im not actually a fan of kiwifruit I found it a little lacking. The mini pavlova component, however, was perfect. The crust was a little crispy and not too thin, and the inside was a tad chewy and just the right amount of sweetness. 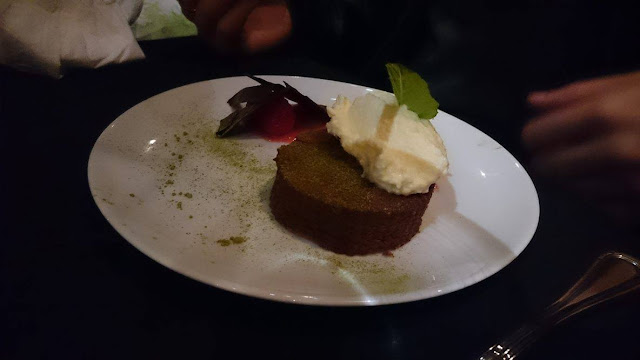 I also sampled the gluten free chocolate cake and while it wasnt the fluffy soft sponge cake I'd envisioned, and more a compact soft brownie sort of cake with a dark chocolate taste appealing to mature tastebuds, I did like it as well. Sadly I can only dream about the creme brulee tart and how the crispy sugary crust would contrast with the custard and the tart crust and flavours. On a side note, the edible jelly perfume once again made an appearance to enhance the dessert, so that was nice.

Service
I'm not sure if its a coincidence or not but they filled up the dried ice display again while I was starting to take photos of the area and I think that was really sweet. It was pretty professional and high class-y when you went in; the waiter even pulled my chair out for me and seated me like a gentleman. 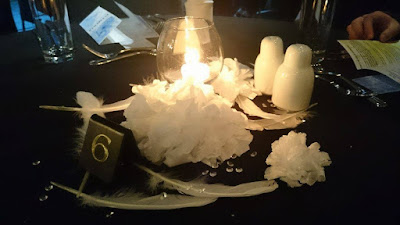 Our waitress/waiter was really nice and nobody at all commented on my impressive collection of water glasses. I should probably explain that; I've been sick these few weeks so I could only drink warm water, but it felt fussy to ask for warm water at the entrance so I just asked for water and hoped it would warm up later. I took it to the table and was poured a second glass of yet again cold water. I finally had the guts to ask for warm water and recieved another glass, and later when my glass was almosg refilled with cold water I asked for warm and recieved my fourth glass. Luckily the next waitress asked for my glass to refill instead of getting me a new glass so I didn't recieve a fifth.

I was really upset about missing out on the double baked cheese souffle, as well as the creme brulee tart, but it helped we had a friendly face to tell us I suppose(I'm still really sad though). Our companions wanted to watch a movie and endeavoured to get the food to come faster and I'd say they came rather fast, though whether that was the normal time or not I couldn't be sure. In the end they decided not to go and ate more slowly, which is pleasant.

Presentation
The presentation was really good in all cases, though my salmon dish was a bit on the careless side. Also the sauce and the sorbet for my pavlova dessert seemed to have melted into each other a little but I suppose that's to be expected in the waiting time.

Overall a very interesting experience and I do wish I had been able to try the dishes I missed but I'm glad the event was a success.

Just the One Lamb
Posted by Anonymous at 23:02