Baduzzi - penne for my thoughts?

Yup as usual its Jia, no impasta here ;) It seems the first post of the year will be rather late, as will my new year greetings to you all.I know it's the beginning of February but I did draft something on New Year's day, honest. I'm not even going to bother with making the resolution of posting more frequently because let's face it, we aren't going to. The sad thing is that every time I go to a new place, I spend half my meal taking pictures and taking notes and then I don't even blog it hahaha. In other news, Songie and I went on a road trip!! First time for me without parents, super exciting ooo~ 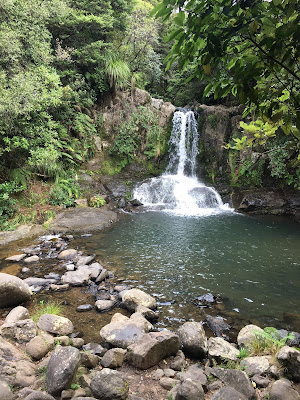 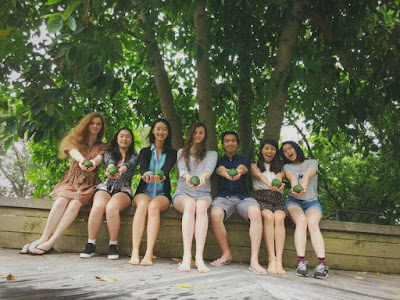 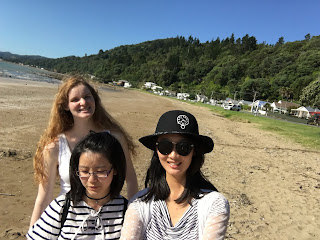 I really like the open atmosphere of Jellicoe St restaurants and cafes, where they open up their sliding doors to let in the summer breeze. This one was a mix of classy vintage style and quirky, blending dark and light with the atmosphere of a smokey classy bar of the Gatsby era, enhanced by the light of dusk, tiled and wooden floors and vintage looking furniture. Also these cute Mother Mary salt spoons. 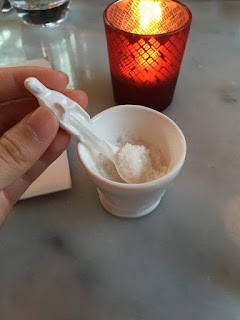 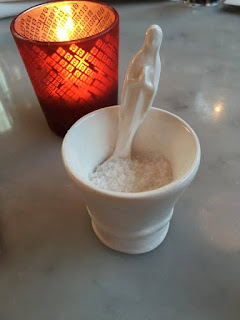 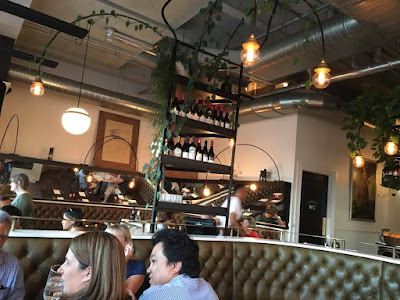 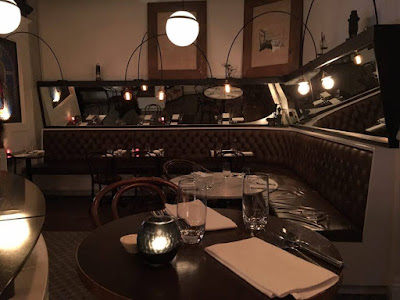 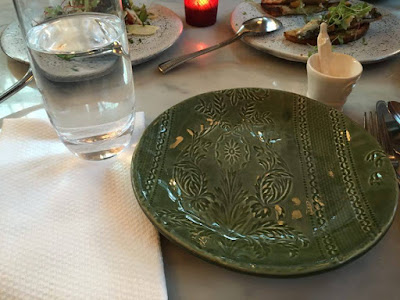 I liked the touch of greenery scattered around the upper space above people's heads, instead cluttering the floor. The glass doors made it a very bright space during the daytime and a bit like a greenhouse. The rounded booth seats, floating orb lights, curvy lamps with interesting light-bulbs, the antique decorations(such as burnished metal candle-holders, an old fashioned metal scale, statues, and framed biblical art) and unique dishes different to the typical plain white dishes of a usual high class restaurant. The writing of the menu and signs were all reminiscent of a 20's saloon bar. The mood-lighting is pretty good, it wasn't too dark but still a bit romantic once the daylight faded. 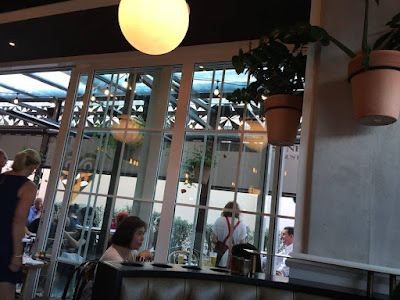 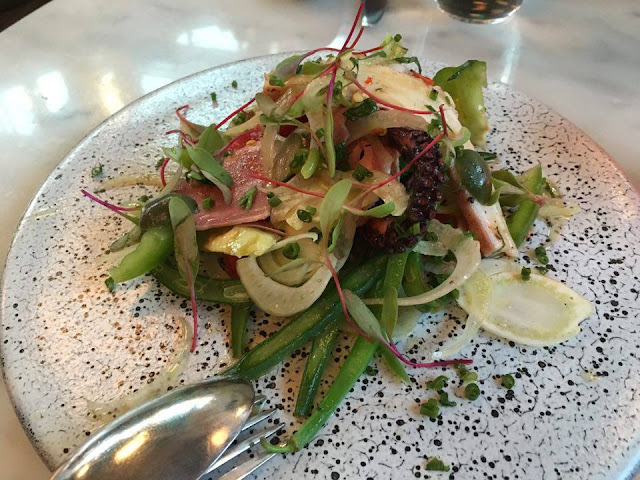 The grilled octopus didn't have much to it beyond texture and aesthetics, but it wasn't bad. The beans were sliced through the middle like a tentacle so that was pretty cool and keeping with the theme. The meat was almost tasteless, but I suppose a tongue isn't supposed to taste like anything(insert dorky laugh). The capsicum, my brother believed to be the main star of the dish, oddly enough I agree(I dislike capsicum usually). The usual strong capsicum flavour was muted in a pleasant way, the texture was soft and bordering mushy without it's crunch but maintained itself with a vaguely chewy texture while being soft, since it was cooked very thoroughly. It had a slimey texture but it slid down well with me. Other than the capsicum I'd say this salad was pretty plain and none too fantastic. 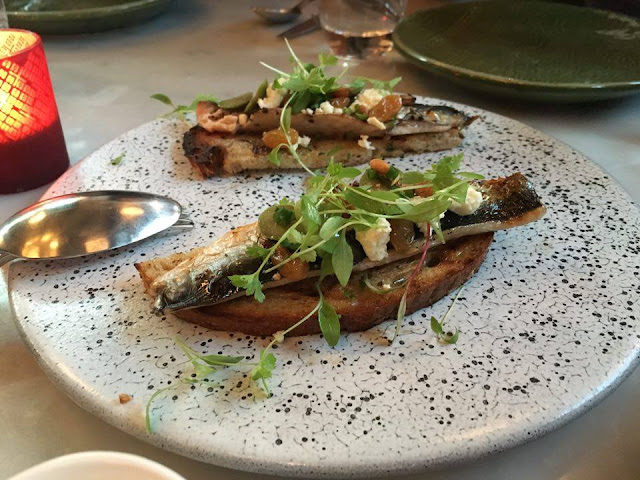 Oookay I did not like this one at all because I personally found it overly fishy. There was a faint taste of other things but the sardine taste overpowered all. I am usually a canned sardine fan but I guess not flame grilled one. On their own the other ingredients had a strong flavour but they had nothing on the sardine. Songie said he liked this one though so to each their own. 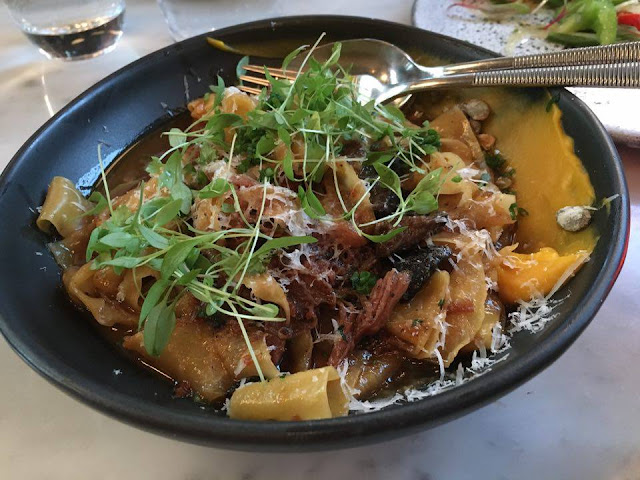 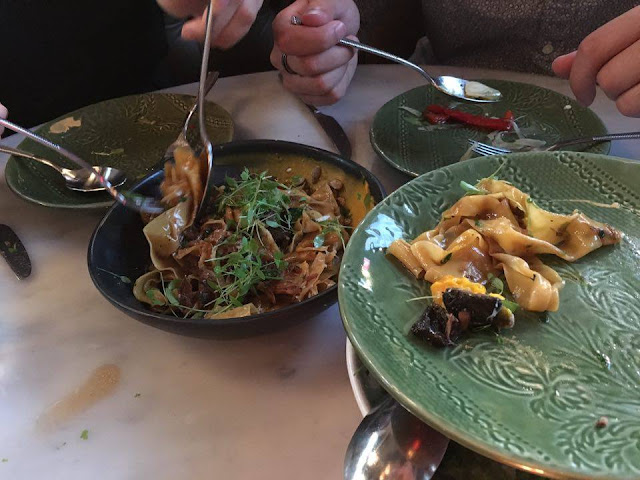 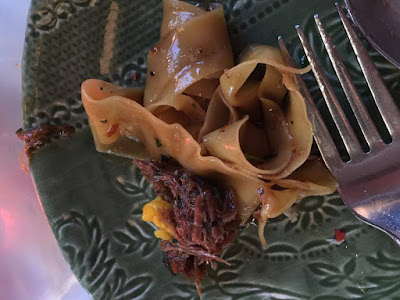 Probably the only con I have about this is that it's so oily, as were many of the dishes here. Back onto the pros, the pasta was handmade, it was very thin and reminded me of the flat noodle sometimes used in Singaporean mee pok. I really liked this dish, probably my favourite one. The duck was different from the usual sliced duck; it was soft and melted in the mouth. The flavour was salty and sweet thanks to the sauce it was soaked in, and the noodles were smooth and were a pleasure to consume. I liked that the noodles were not mushy at all, sort of like al dente spaghetti but nicer. The chestnuts only added to the dish; the usual tangy flavour of pickled foods enhanced with a hint of wine that always goes rather well with duck. 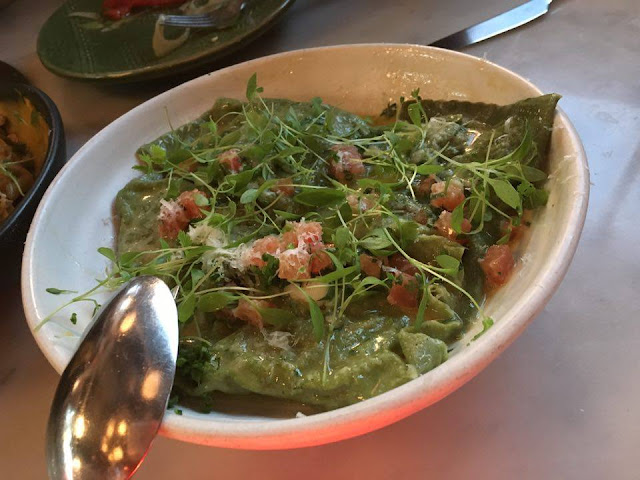 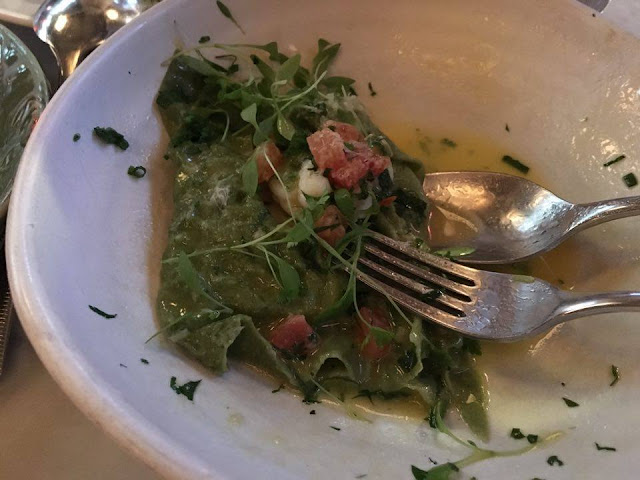 This is probably my second favourite dish of the night. The snapper and lobster appear to be mixed together into a paste and then cooked into a fishcake of a sort, then surrounded in pasta like a pancake. Very interesting. I also liked how even though they had been mixed somehow the fish had retained its flaky flesh texture and overall this was a smooth and tasty dish. Again it had a very buttery sauce(but I guess the name does imply it) with subtle tints of pesto and olive oil. The 'pancake' was steeped in the buttery sauce and together with the greens on the side the textures and flavours were satisfying.

Pesce- catch of the day from the fish market 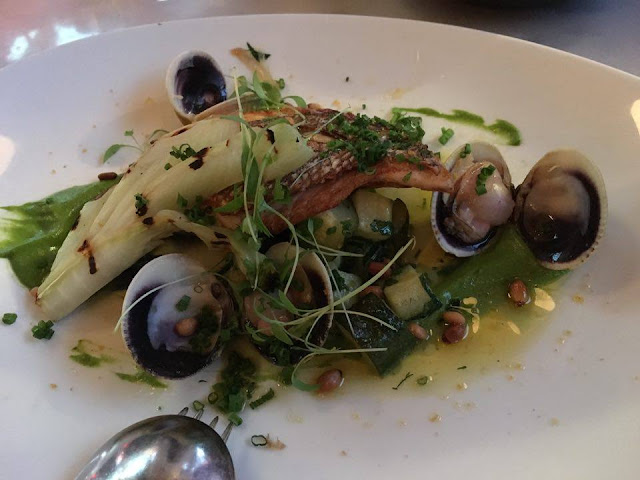 The catch of the day was initially Hapuka but they ran out so it was changed to snapper, with pinenuts and cockles on the side. There was a veggie on top that looks like Chinese cabbage but didn't taste anything like the bitter vegetable, in fact it was vaguely sweet. If my mother has no idea what it is then there's no way I will ever know. The courgette(one of my new favourite vegetables if fresh) was perfectly cooked and juicy. The fried fish was good, but it sort of reminded me of Asian cuisine just with pesto, courgette and pine nuts. The cockles were stronger than I'd expected but not overpowering, so I think they complemented the dish well. However I probably would get another helping of the Agnolotti rather than this if I had to pick. 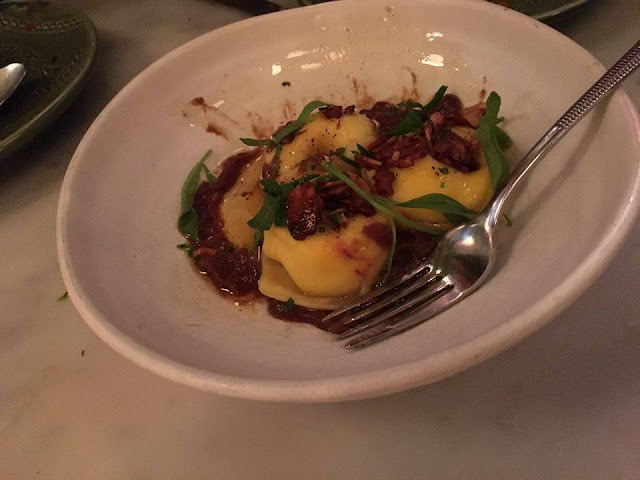 Sorry, Songie dug in before I took a picture. This one was my least enjoyed dish. It was confusing when it first was set down because it smells like cornflakes and syrup, making you wonder if it was a dessert or savoury dish. The initial taste resembled some cream cheese puff, which further confirmed the suspicions of it being dessert. Theeeen the goats curds kicks in a bit, it's not too strong but still enough for you to cringe if you're not a fan of goats cheese(Songie and I are not). It is very creamy though. The sauce is sweet, and there were crunchy almond slices scattered around. Its not baaad. Basically the first few seconds post biting is sweet, then it melts into the salty flavour tinged with goats curd. Definitely better consumed warm. Twas aptly described by Songie as a lemon cheese cake that went slightly off. 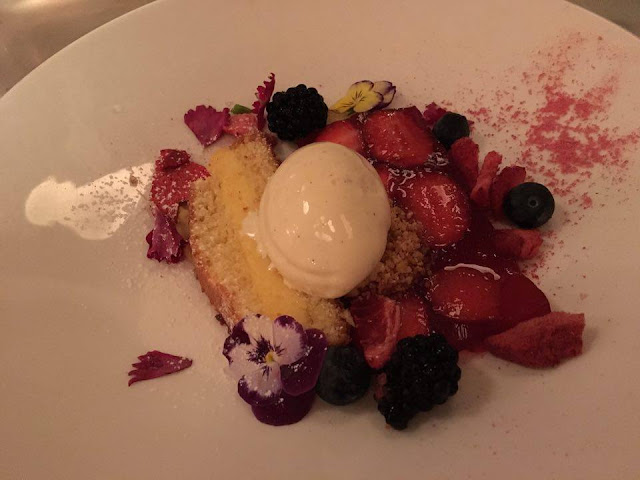 This was an explosion of colour on the plate and it was really pretty. Initially that cake stuff is very dry but once you blend it with the strawberry jelly, berries, ice-cream and sauce it turns into something quite good with different textures and flavours. If i had to describe it I'd say it turns into some kind of creamy crumble.

Tiramisu with Baileys and amaretto ladyfingers 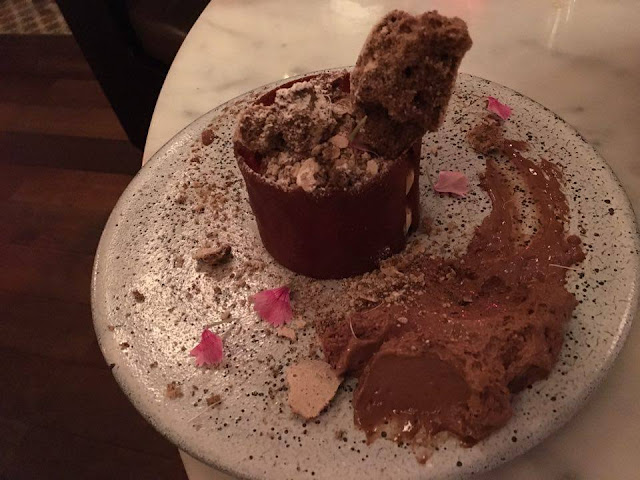 This was great. The creamy tiramisu wasn't overpowering in either it's alcohol or coffee content, and was surrounded by some crispy wafer like the kind you find in a brandy snaps. On top was some sort of meringue with ground coffee mixed in, interesting but probably not something I'd eat on its own though it mixed well with the tiramisu. On the side was a rich valrhona chocolate cream, and overall this dish was a good mix of creamy and crunchy, and just embodied the ideal of tiramisu with a unique twist.

The presentation was great from start to finish; whether it was the bean tentacles, garnish on the plain sardine bread slice, the plates, the pops of colour here and there and the desserts. Fantastic. I'd say it was on par with Japanese cuisine presentation.

This actually cost less than I thought it would considering it was fairly upscale. For the 4 of us it cost
$189, which is of course still a splurge but all in all not really too awful.

Hmm I'd recommend this place for sure, but probably if you're on a relatively high budget. Would definitely be a good date place for an anniversary or something. For more information click here.