As we mentioned before, we've landed in Singapore and we intend to blog about the food here too. Because we can. If you didn't get that then I don't know how you've been reading this blog cause that was just a couple of posts ago haha. We'll be going to places like Bugis Junction, Tiong Bahru, Orchard Road etc etc (the list really is somewhat endless). Basically just trying out local food, fancier places and whatever we come across really. So straight off into the eats!

Tiong Bahru Market (foodcourt with market below) is where we started the very next day (see how dedicated we are to you guys?) Places like these aren't called foodcourts as much as they're called Hawker centres. It's essentailly the Singaporean version of a foodcourt, and although some modern places have begun making foodcourts in the same style, it all originated from these outdoor eateries. The great thing about places like this is the choice. Or the not so great thing. Depends how decisive you are really. Or how much you can eat. Or how much weight you allow yourself to gain... Anyways. 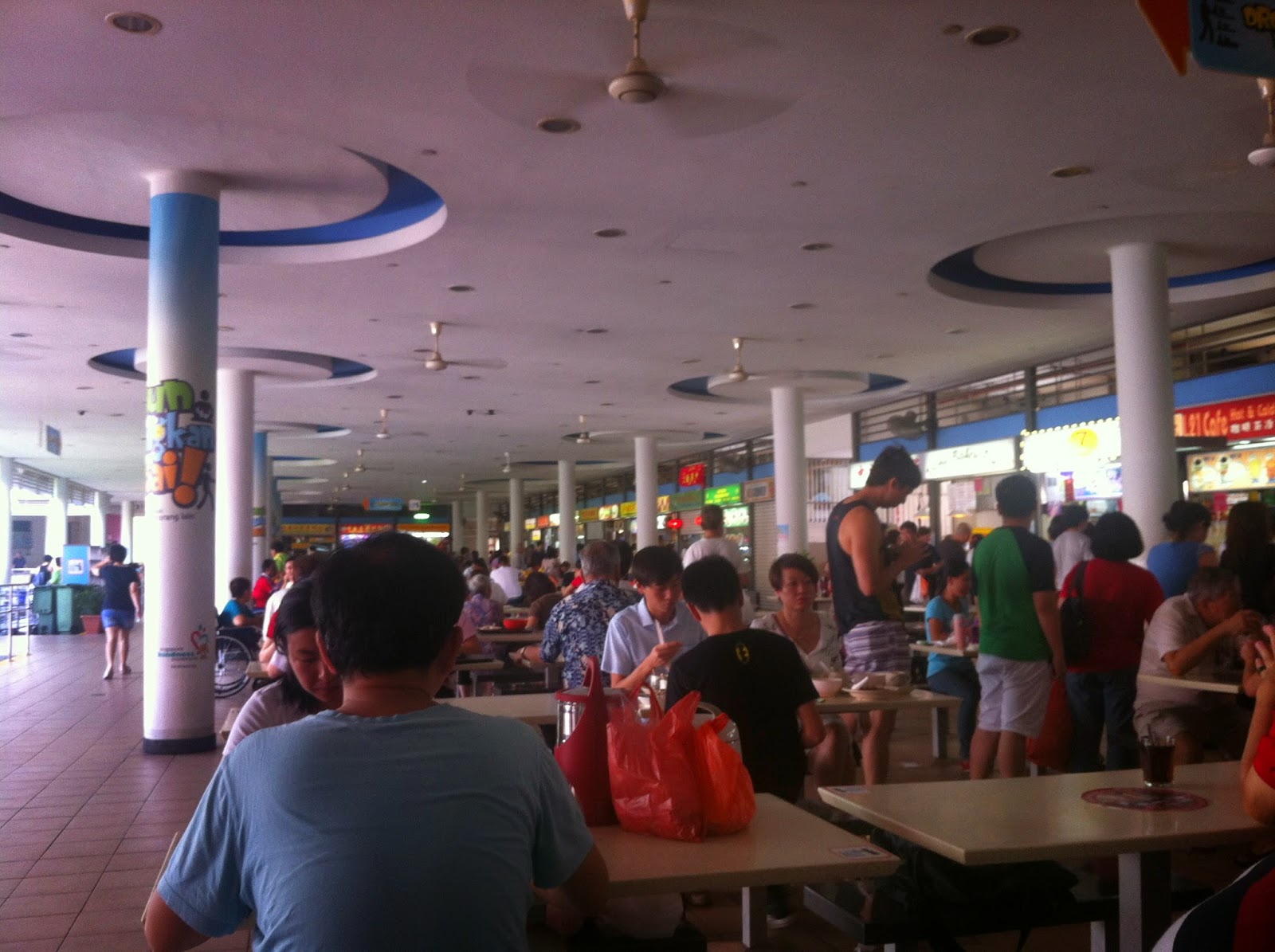 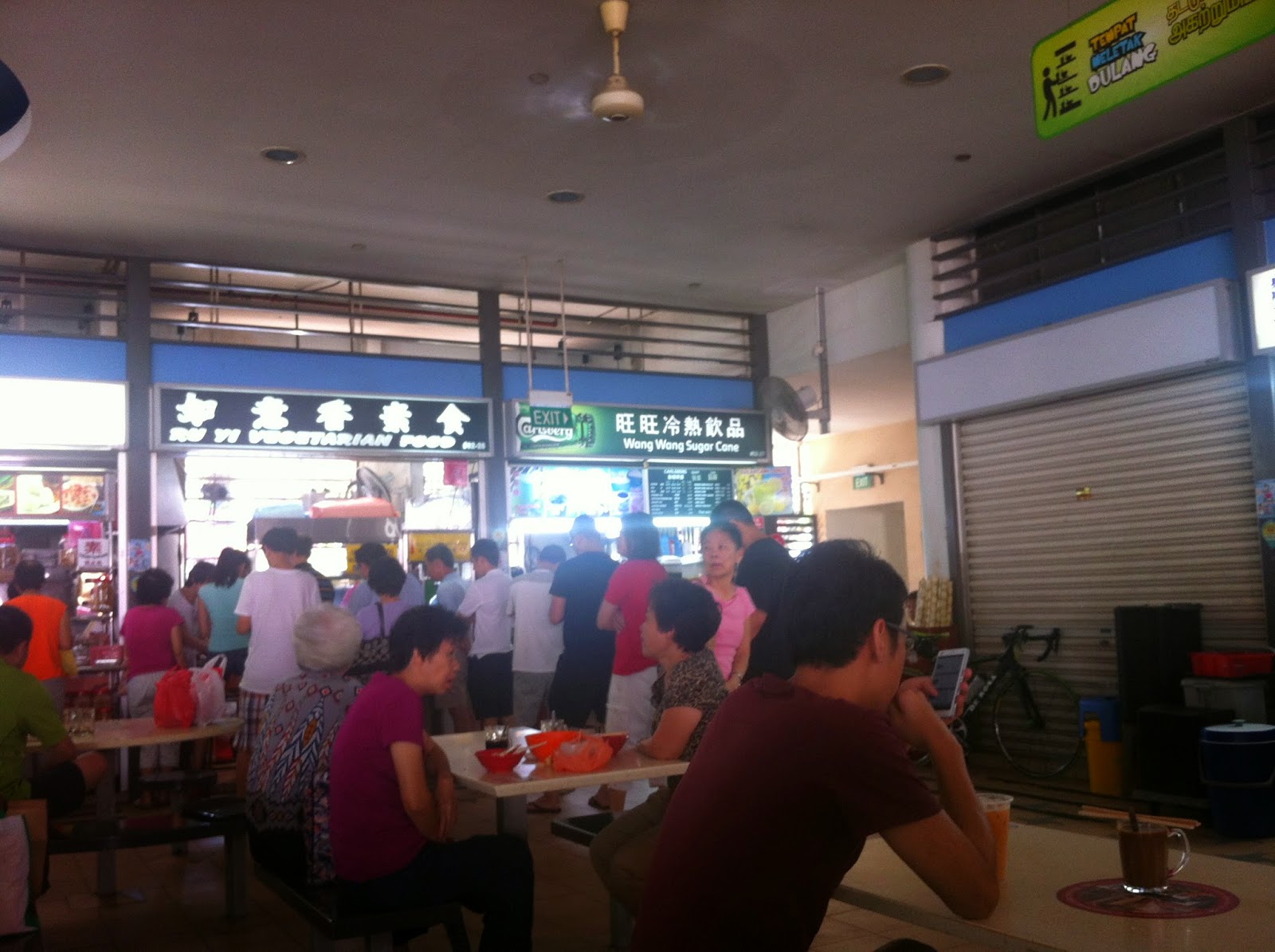 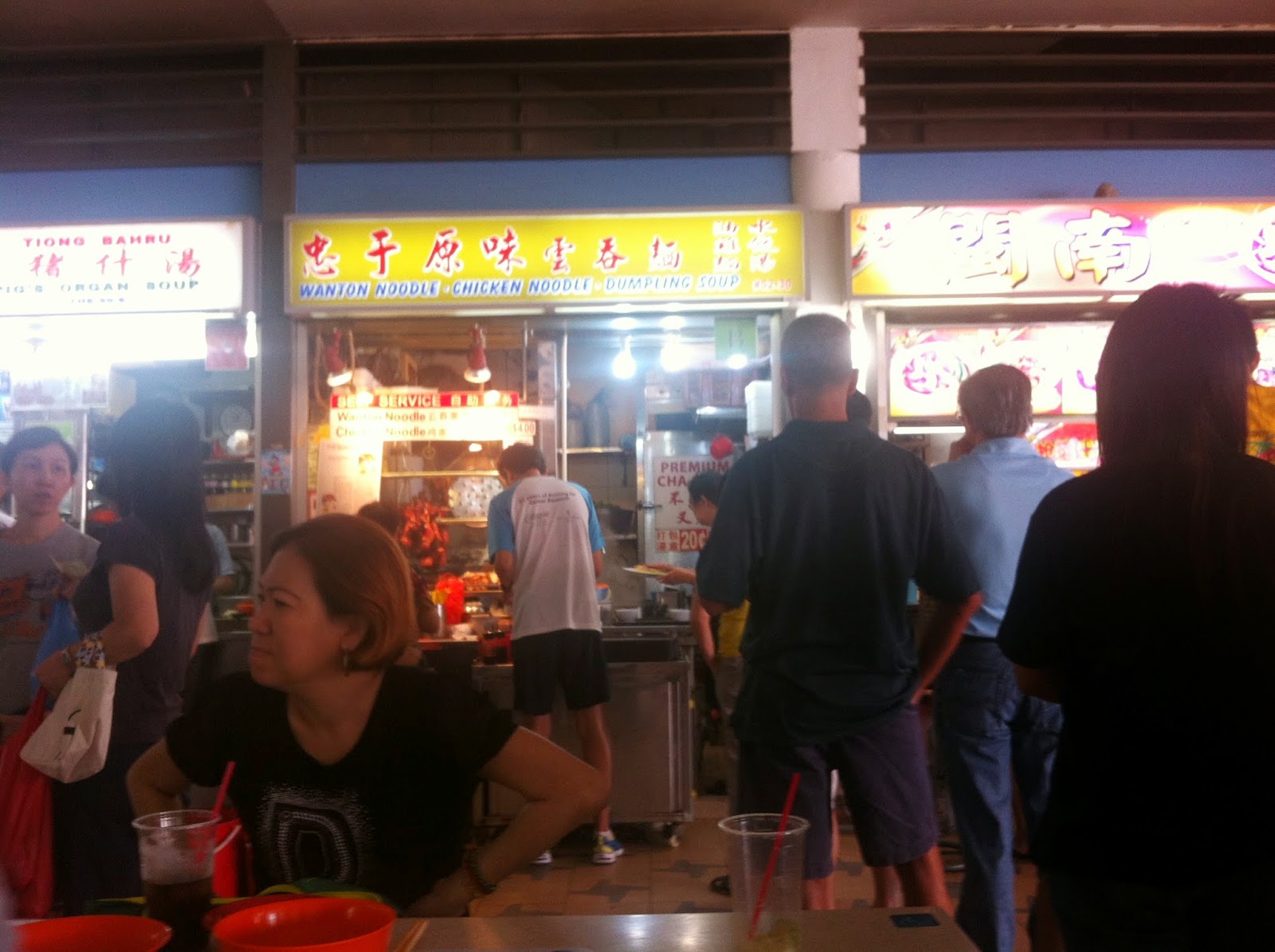 Hawker centres are literally everywhere. From town centres to small rural areas. As we mentioned earlier there is a huge variety to choose from. You often hear people talking about how cheap food in Asia is, and you have to realize that it's cheap in these specific places. You are not going to head to a restaurant and find a steak for $3. This isn't Las Vegas. But to be honest, when you do travel to these places, it's the Hawker centres that offer that level of authenticity and home feel to it, throwing you right into Singapore's busy lifestyle and culture. It's fantastic. But if that's not your thing then go wild and splurge on a nice restaurant, the quality of those are top class as well. But more on that as we go.

In this particular hawker centre we went with the following:

Kaya guyu - SGD $1.80 for 2 servings.
This is something that Singapore is known for, their kaya. For those who don't know what Kaya is, it's a food spread, made out of eggs and sugar, sometime's coconut milk too along with the pandan leaf which gives it the green colour. You know how some countries like their bread with peanut butter? Or butter? Or tuna? This is the Singapore/Malaysia equivalent. So of course as soon as we saw it we just had to order one.. or two in this case.. It's something that reminds us of childhood really. This one was rather disappointing, we think we know better places though so we'll definitely find a more satisfying one before we leave. The bread was ridiculously thin, I mean, how they managed to slice it so thin... Maybe they have a bread slicer and set it to the paper setting. Granted it was 90c a serve so that would explain it. The overall taste was pretty flavorful balance was fine (why I'm talking about balance in what can be classed as street food I'll never know) not too much Kaya and not this fat blob of butter where you feel like you're just chomping down on a ton of fat and oil (trust me it has happened more times than we want to remember). Incredibly fast to get, literally like 2 minutes, food comes out very fast in these places, as the more they serve the more money they make so it's pretty much the fast food of this country. 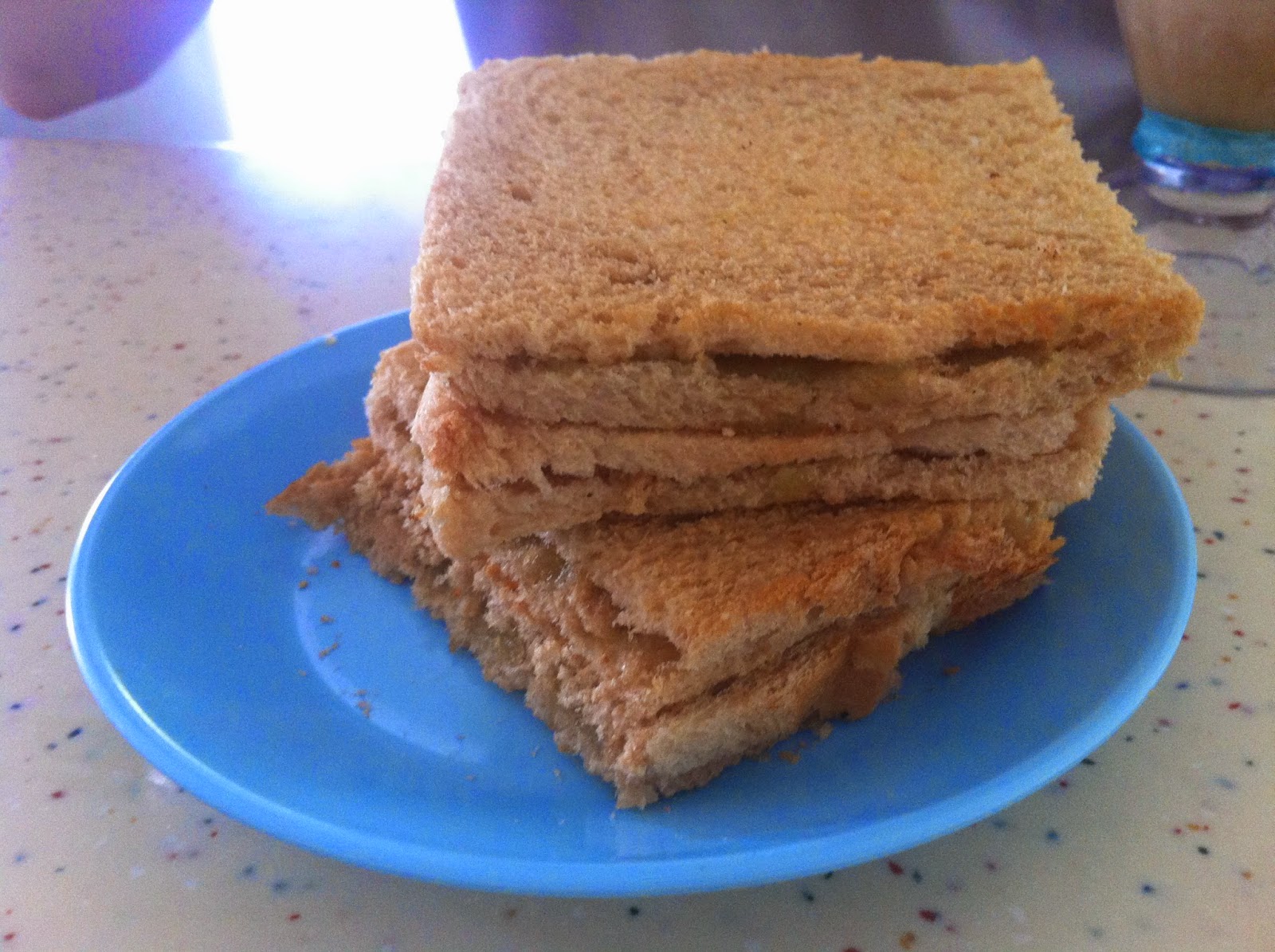 Char Siu plate SGD $12-15 - Char Siu is a Chinese stlye grilled pork. It has this flavour combination of being both sweet and savoury due to its marinade and also usually sticky because it kind of caramelizes (which is usually the best part). This is a very typical dish to have in almost any Chinese place not just Singapore but we find that we haven't found a satisfying one in New Zealand yet anyways. (Let us know if you know any places and we'll check it out)
This sounds INCREDIBLY expensive for food from a hawker centre but apparently this particular char siew was from a good part of the pig. Dad translated it as "part of the pig that doesn't see the sun", and Jia decided to link that to the phrase "stick it where the sun don't shine" which means.. well..yea.. If you don't know what it means ask your parents kids. It WAS delicious though, and satisfying making it pretty worth the price. There were some parts that were overly fatty much like a pork belly that Song had cooked in 2014 (hey I can use that phrase now) where the amount of lean was maybe like 10% and the rest was fat. We decided that that part was actually pork belly just because of the way it was split, we are by no means pig experts. This plate was about 500g-600g and filled all 3 of us up easily and we even had to pack a few pieces home. The line for this was incredibly long, and the saying goes that if the line is long, the place is good. More or less the rule you should go by when coming here 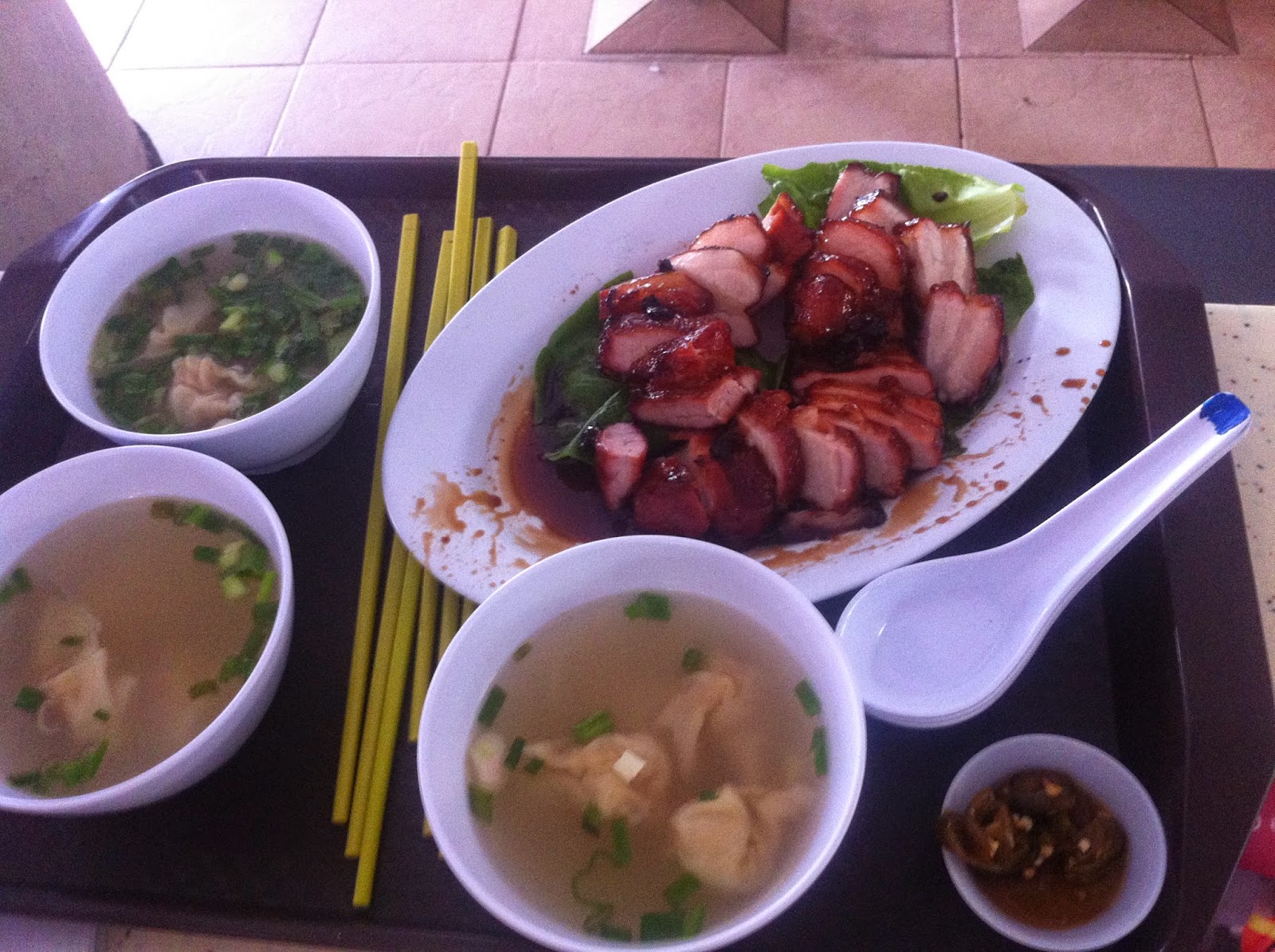 Cha siu with wonton noodles(Didn't get a picture, sorry guys). SGD $4
We liked the thin noodles. Some noodles in Singapore have a delightful aftertaste that is at once strange but delicious. (I have no idea what Jia was saying here. I found the actual taste of the noodles here to be a bit strange. Apparently they do it themselves but it wasn't really to my liking.. ~Song) The pork was of the same variety as the aforementioned probably pork belly with some vegetable on the side and was about $4.  It also came with a small bowl of soup with little wonton in it(Jia used to call them brains because aside from the extra skin floating around it, it resembled a brain. Unfortunately Jia ate it so you'll have to imagine that for yourselves), which was nice. The soup usually makes me thirsty, and its a bit peppery but was a bit lighter this time (and again had the same taste as the noodles so it was a little weird to Song).

On a parting note; a few rules for going to Hawker centres are;


OK with that, we'll leave you for today :D
Stick around~

The Lambs
Posted by Anonymous at 02:29